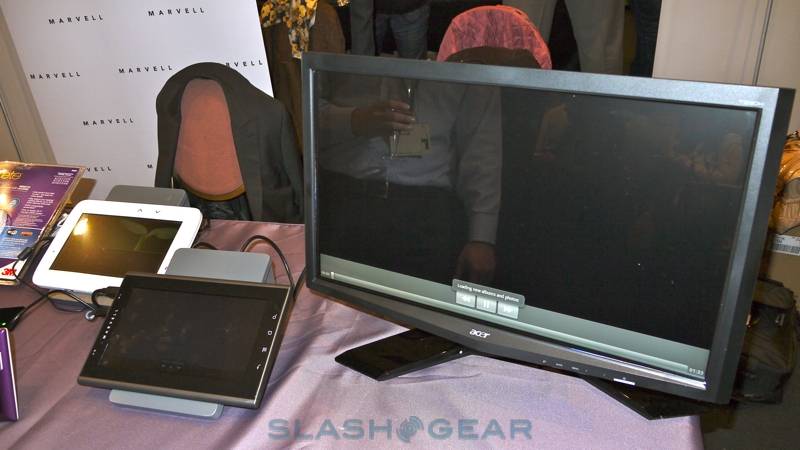 This ARMADA 600-based Android tablet reference design by Marvell is being showed off in order to make way for a bunch of Marvell branded products capable of using 1080p chipsets that’ll be launched at CES 2011. The demo pad our people at SlashGear have their hands on is a 10.1-inch 1280 x 720 capacitive touchscreen and it runs Android 2.2 (Froyo.) Chris Davies notes that this device was up and running only only its own display, but an external HDTV over HDMI as well!

Marvell said they weren’t noting any specific chipsets, but they did display this ARMADA 628 as their lead tablet. Inside, a tri-core chip capable of 3D graphics, 1080p video encode/decide, hi-fi audio, advanced crypography, and digital photo data processing. Also inside the 628 are a pair of 1.5Ghz cores for processing plus a 623MHz core to be used for apps with tinier power reqs.

The specifications you’ll end up looking at when you end up purchasing one of these bad boys will depend heavily on OEM choice, leaving it up to manufacturers to choose things like the amount of memory to fit inside, what cameras will work, what sort of display to slap on the front, and more. Check out this video demo, courtesy of SlashGear: