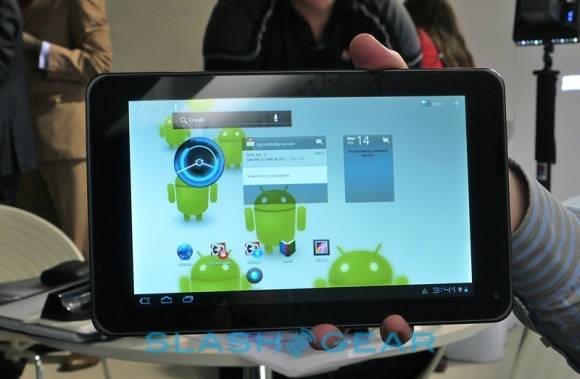 T-Mobile is showcasing it’s LG designed G-Slate at MWC this week.  It’s a mid-range tablet with a nice 8.9 inch screen, fitting it nicely in between the 7 inch pocket and the beefier 10 inch category.  Specs include running a Tegra 2 processor for around 1Ghz in processing power and running Android 3.0 (honeycomb) which is as standard as iOS 4 is to the iPad now.   But it also has 3D which could make the viewing experience quite interesting.

Unfortunately, users will have to wear those geeky red/blue 3D glasses to get the 3D vibe, but LG has made switching between 3D and 2D pretty seamless in the interface and it will enable 3DTV fans to use their G-Slate as a media portal to boot.  All the usual connections including HDMI, microUSB, as well as T-Mobile’s HSPA+ network for high speed connectivity. And there’s an optional docking port stand for easy charging and connectivity.

No word on price just yet, but it’s due out later this year. So stay tuned!