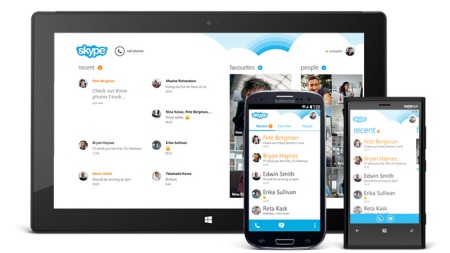 Skype for Android has recently crossed the 100 million user milestone and coming along with that is word of an update. Skype for Android has graduated to version 4.0 along with the new version number comes what is being called a “modern” design that puts conversations first. With that in mind, as you can see from the image sitting below, the design brings a look that may be familiar to Windows Phone users.

In fact, the details coming from the Skype announcement talk about how they “started to reimagine” what Skype would look like when the Windows Phone 8 app launched late last year. More important though, the goal of the app was said to offer something that put the conversation first, which was done in part by making it easier to interact with the app.

The interesting part here, Skype for Android 4.0 is a completely new app. This update wasn’t a makeover, but instead it was rolled-out as an app that was rebuild from scratch. Some of the focus with the redesign was stability and performance as well as load times, but that is not where things stopped.

Skype 4.0 for Android brought a new look for the recent conversations and users will be able to access those conversations with a single tap. Additionally, Contacts and Favorites are accessible from a tap or a swipe and from that point, a tap on a person will launch the messaging window which means a conversation in the form of video, voice or text.

Aside from the big changes that have come along with Skype 4.0, there is still more to come. There was talk of more updates in the “coming months and year ahead” that will make Skype “more reliable, reachable and mobile friendly.”