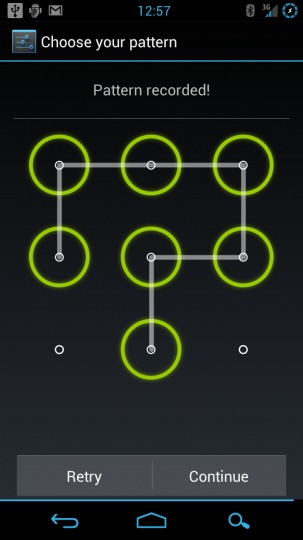 Here’s some good news for those who frequently forget their pattern to unlock their phones: a developer on the XDA forums has discovered a relatively simple workaround for pattern-locked devices. This workaround requires just a few lines of code in ADB, and it’s made even easier by the fact that your phone doesn’t need to be rooted in order for it work. Of course, that also means that some undesirable people may be able to gain access to your phone if it’s ever stolen, so watch out for that.

According to XDA forum user m.sabra, the only thing this workaround requires is that you have “USB Debugging” enabled, and though rooting isn’t necessary, he also says it would be better if the device is rooted. Once USB debugging has been enabled on your phone, all you need to do is enter a few lines of code (which can be found in thread linked to above) in ADB, reboot, and then you should have access to your once-inaccessible device.

This will likely be a godsend for people who forget their patterns on a regular basis, but as stated above, the ability to easily get into your locked up phone comes with a price. Anyone with a little knowledge in ADB will also be able to get into your phone and in turn your personal data, so if you’re a developer (or hacker) and frequently have USB debugging enabled, it’s probably a good idea to start remembering to turn it off. All it would take is you taking your eyes off your phone for a minute and it could be gone, thus opening you up to all kinds of bad things.

The kicker here is that it doesn’t even take someone who is well-versed in ADB to pull this off. Someone with a basic knowledge of ADB could do this easily, which is again both a blessing and a curse. It’s nice to know you’ve got an easy way in should you ever find yourself locked out of your phone, but at the same, it’s scary knowing that malicious people could have the same easy access. Watch those phones, folks, and be sure to keep USB debugging disabled when you’re not actually using it.