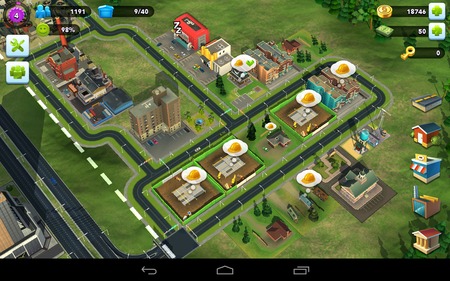 Who among us have never enjoyed a SIMs game (and maybe you still are addicted to it!) or an entertaining-at-the-start-but-might-get-repetitive-eventually city building game? A new game from EA combines the best of both worlds as they soft launch SIM City Build It, which is what its name says it is. You get to build a whole city from the ground up, but without the complication of having your (sometimes annoying) sims around and you do it from the convenience of your mobile device.

It looks like it and it feels like it, but it is definitely not a straight-up mobile version of the sim city game. At least, not yet. It is simply a city building game where you get to place roads, buildings, water works, the whole urban planning shebang, but without any simulation or drama from characters. You play it just like you would any other city building game on Android, but with the visual style of the most recent Sim City PC game, complete with a full out 360 degree 3D view of the city, which you can zoom in and out of (and even spin!)

You will need to supply your city with basic necessities like water, electricity, etc, because you still need to keep your residents happy (even though you don’t see much of them here). You also need to solve other city planning problems like traffic congestion, fires, pollution, etc. Basically, as the “mayor” of the city (and the sole player of the game), the buck stops with you. But you do get to interact with “friends” and other cities and you can trade your resources with them.

The good news? Sim City Build It is free to download from the Google Play Store. The “meh” news”? There are in-app purchases so you need to be careful if you’re concerned with your credit card health. The bad news? This game is still in soft launch and is only available in Canada.