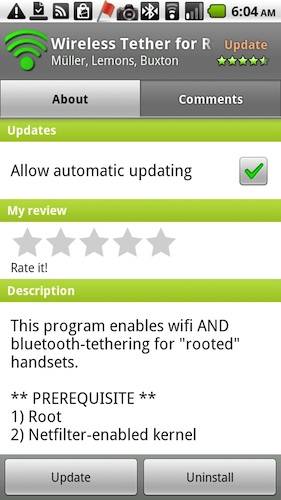 Word is on the internet now that users of the Milestone, Vibrant, and Fascinate running android 2.1 with update 1 are receiving a “silent update” which brings them from Android Market 1714 to 2007. With it users are reporting many Froyo features have been added to their Android Market.

Specifically users are reporting that “Update All,” Comments being on a separate page, it comes with a widget, and an automatic update checkbox.

As of now the only issue that has risen with this silent update is that users are having problems with their paid apps, while choosing to update them asks for you to initially purchase them (again). Chances are this is just a simple bug, and will be fixed soon.

To all of our 2.1 equipped readers, have you noticed the silent update and it’s features? Having any problems? Let us know in the comment section below!