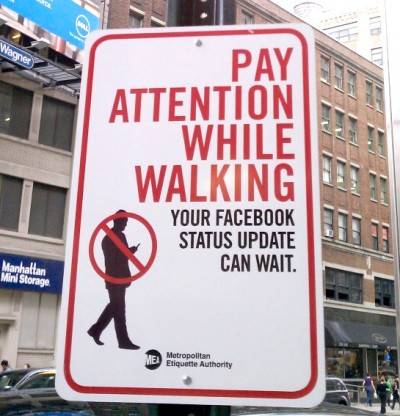 Texting while walking is something we all do on basically a daily if not hourly basis. Could you imagine walking down the street in NYC, Las Vegas, or multiple cities and getting pulled over and ticketed for texting while walking? Sounds crazy right? According to multiple reports that is exactly what’s happening at a small town in New Jersey.

While the reports aren’t completely accurate we are seeing this news appear from ABC News, The Huffington Post, Into Mobile (picture credit) and more. When I first read this I immediately knew it couldn’t be true, and had to look into it briefly myself. Apparently the small town of Ft. Lee, New Jersey has started issuing $85 dollar tickets for those walking and texting. I know I’d be furious if that happened to me.

Apparently after three fatal accidents were caused by people texting while walking, and not paying attention they put this law into affect and the grace period ended mid-March. Since then over 117 people have been issued $85 fines and tickets for texting while walking. Thoughts? It looks like ABC News’ initial report was inaccurate and the city is actually issuing these tickets for “jaywalking” if you do so in an unsafe manor while using a cell phone, not just for walking and texting in general.

I wanted to write a quick post and see our readers thoughts. Obviously texting while driving is extremely unsafe, and the same goes for walking — although not nearly as severe. I know while walking around at CTIA 2012 in New Orleans I was ran into by multiple people texting and not paying attention, but then again we aren’t cars going upwards of 75 mph either. Accidents happen every minute across the US both on the road, bicycles, and our feet — and many come from smartphone usage. While I completely agree with texting while driving being illegal, walking is a bit different.

Would you be furious if you got a ticket for texting while walking, and do you think it should be legal/illegal or will be in the near future?