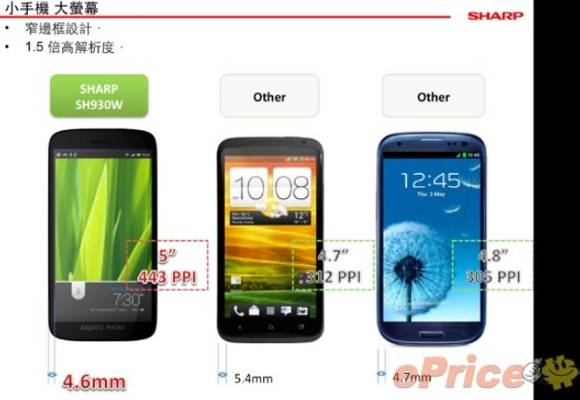 Smartphones with quad-core processors and massive 5-inch 1920 x 1080p full HD displays are going to be the talk of 2013. HTC’s already released their DROID DNA, and reports of similar offerings have came from Samsung, LG, and a few others. Today however Sharp is showing off their new 5-inch 1080p smartphone, and comparing it to the competition. It features some pretty impressive specs too so lets take a look.

Known as the Sharp Aqous SH930W this Android 4.1 Jelly Bean powered smartphone is smaller than most thanks to an extremely thin bezel. They sadly only compare it to the Galaxy S III, HTC One X+, and of course the Galaxy Note II, none of which have a 1080p HD display like the DROID DNA. However, it still shows just how impressive the Japanese companies new smartphone actually is. 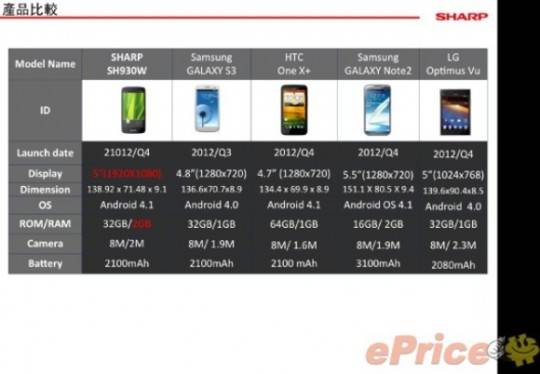 Sharp has scaled back on some of the top end specs the DROID DNA comes with, and are going to offer it at a lower price point for their customers. You’ll be working with the same 443 ppi 5-inch 1920 x 1080p HD display but they’ve dropped 4G LTE, dropped the quad-core, and instead it’s powered by a 1.5 GHz dual-core Snapdragon S4 processor — which is still plenty powerful. You still get 2GB of RAM, an 8 megapixel camera, and Android 4.1 Jelly Bean. Sharp increased the internal storage to 32GB (compared to 16GB on the DNA) and the battery is still pretty small dialing in at 2,100 mAh.

The folks from ePrice got their hands on the training material you see below, and according to them the device will be on sale come mid December in multiple regions, starting with Japan. According to them it will be priced right around the $580 mark. The phone has just been announced so we aren’t sure what other regions will get to enjoy this 5-inch phablet from Sharp. Stay tuned for more details.