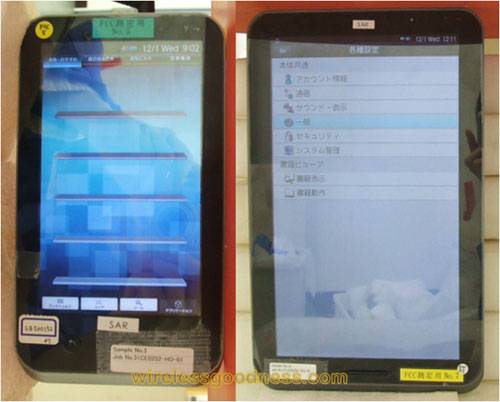 I mentioned last week that Sharp was set to bring its pair of Android tablets under the Galapagos name to the US. We all know that the first step to bringing any gadget that has wireless communications gear of any sort inside is a stop at the FCC for the needed approvals for the US market.

Those two Sharp Galapagos tablets have now landed at the FCC for their needed approvals. Both the 5.5-inch and the 10.8-inch tablets were spied at the FCC by Wireless Goodness over last weekend. That 5.5-inch tablet is the EB-WX51GJ and the larger 10.8-inch version is the EB-WX1GJ. Both of the tablets use Freescale processors and apparently use SDRAM from Samsung inside.

We know that these are Android units from earlier reports of the devices from Japan. Wireless Goodness reports that the OS in the pictures at the FCC appears to be a form of Linux. The OS looks like the previous pics we have seen, which is presumably a custom UI over Android. We still have no firm pricing or availability date from Sharp on either tablet.