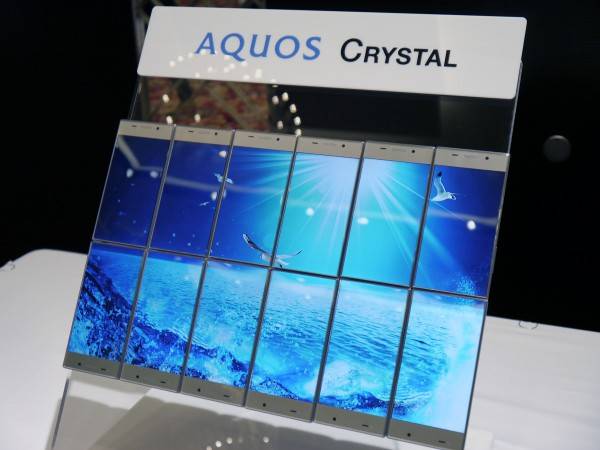 When Sharp announced that their upcoming Aquos Crystal phone would have “edge-to-edge display”, people’s expectations of what it would look like were heightened. As they have now unveiled the actual phones, it would seem to have met those expectations, as the front panel of the smartphone has super-thin bezels, giving justice to the original description.

The Aquos Crystal is a 5-inch, 1280×720 pixel HD phone with that will be running on Android 4.4 KitKat. But what has really caught the attention of people is the almost bezel-less front display of the smartphone. In the photos and videos from Buzzup in Japan, the phone is being shown off in all its edge to edge display glory.The previously released Droid Razr M from Motorola was the closest that we came to that kind of display, but compared to this one from Sharp, the borders now seem too big.

But aside from the beautiful display, the Aquos Crystal also has some relatively good specs to offer. It will run on a dual-core Qualcomm Snapdragon 1.2HGz processor with 1.5GB RAM and 8GB of internal memory. It will have an 8 megapixel main camera and a 1.2MP one for the front-facing camera. It will come out in white, black, pink and blue colors. There is a more powerful version of the Aquos Crystal called the Aquos Crystal X, with a 1920×1080 display running on Snapdragon 801 and having 2GB RAM and 16GB of internal memory. However this version will only be released for now in Japan and will have red, white and black colors.

Softbank will be releasing the Aquos Crystal in the US by the end of this month while the Crystal X will come out in Japan by end of this year. There is still no announced standard retail price for the smartphone, but here’s hoping we don’t have to break a bank to own this one.