Last week we heard word of a new mobile OS called Tapas, it was announced by former Google China head Kai-Fu Lee and has now been confirmed to be shipping on 2 new Sharp cellphones later this year. The OS is based on Android and is built specifically for the Chinese market. Some of the starter features of this new OS include the ability to identify geographic origin of incoming calls, syncing with popular Chinese social networks, and a new “karaoke-style” music player that identifies songs and then displays their lyrics on-screen.

The first model being released from Sharp is the SH828U, a 3G phone that comes with a 3.5” WVGA screen, 5 megapixel camera (with autofocus and flash), Bluetooth, WiFi, and a microSD card slot. It’s powered by a 600MHz Qualcomm MSM7227 processor and is expected to ship this October with a price tag around $475 USD. 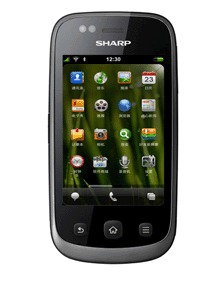 The second model is the SH8118U, shipping with the same 600MHz Qualcomm MSM7227 processor and specs as the SH828U but only features a 3.2” HVGA screen. With the smaller screen comes a cheaper price point, the SH8118U will be available in October with an about $335 USD price tag.