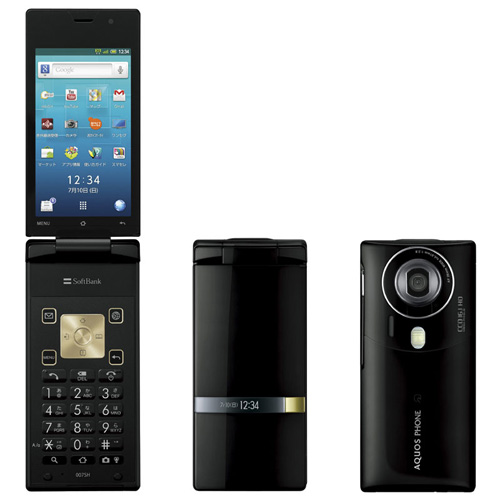 What in the weird is going on here? It’s true Android can be run on basically any device you’ve got prepared for it to run on, but a clamshell phone? Sort of like back to the future, yes? This device is Sharp’s effort to bring something “new” to the Android world with some surprisingly impressive specs for such a retro looking phone. Behold a 1GHz second-gen Snapdragon processor, 16-megapixel rear camera, and Dropbox and Qik apps pre-installed for your pleasure!

This little ditty they say will be coming out in Japan first but given a good response will be spread over the whole toasty earth like a jam. Will it beat the Galaxy S II? Hardly. Will it sell a few thousand units? One would hope. This device also has a… what?! A 3D ready display with a 3D TV tuner! On there’s a front-facing camera with an unnamed resolution on it as well. Probably VGA like everyone else, tuckers.

What an odd little combination of elements! Would you purchase such a device if it were put in front of you? Looks like it’s running Android 1.x doesn’t it? Turns out it’s running Android 2.3 Gingerbread from what we’ve been told. Also that flippable screen weighs in at 3.4-inches. Nice? Seems kinda sorta nice.