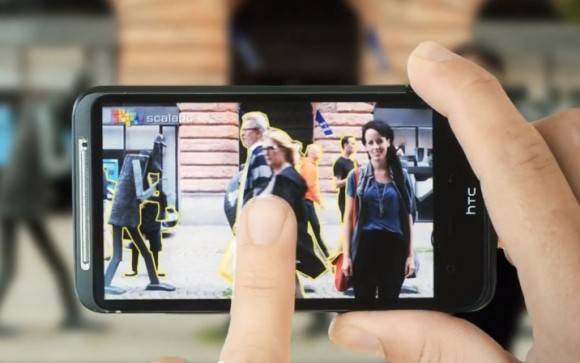 Have you ever snapped the perfect picture only to have it ruined by someone walking in the frame, or wanted to take an ex out of that awesome picture from your vacation? Well now you can with a new feature from the photo technology firm Scalado, called Scalado Remove. Their app is being called the world’s first optical removal software for smartphones. It builds a composite shot from multiple frames captured in swift succession, picking out possible flaws – such as passing cars or people – then lets you delete them with a tap of the screen.

So technically you can’t remove old ex’s from pictures in the past, but you’ll be able to edit out anything that is not stationary. The object has to be moving for Remove to capture and delete the subject. While it will have a few limitations the possibilities and overall functionality is extremely impressive.

Once you take a picture you’ll need to keep the camera still on the particular subject. Scalado will then be able to remove moving objects based on the stationary background. All you do is touch the moving subjects you want gone and it does the rest. We must mention that this will not actually be an application we can all download and use. Instead this will be software added to smartphones and hopefully Samsung, HTC, and others will partner with Scalado to bring this to Android soon.

Scalado will be showing off this neat new technology and software at Mobile World Congress 2012 in Barcelona Spain and I’ll be sure to stop by and get some hands-on time with it. This will surely help me get what I call the “money shot”. Would you use this software if your smartphone had the capability?