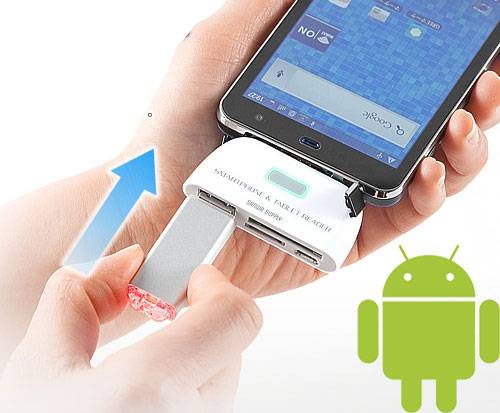 Most of the Android phones on the market have some method of external storage, almost always in MicroSD card form. But a few notable phones like the Nexus S and Galaxy Nexus lack this capability, as do several high-profile upcoming phones like the HTC One X. A little company called Sanwa aims to correct these oversights with the Sanwa USB Reader, a gadget that’s nothing if not descriptive: it plugs into a standard MicroUSB port and adds a full-sized USB port and standard SD/MicroSD slots, plus another MicroUSB port, presumably for pass-through charging.

There’s just one problem: this little gadget is not universal. Right now the only popular devices it supports are the Samsung Galaxy S II and Sony’s Tablet S, with some Japan-only Sony and Toshiba models thrown in for good measure. Of course the Galaxy S II already has a MicroSD card slot, but I suppose it could still be useful for its other functions, and will (probably) work with Samsung phones that are simple enough. Most of this is a moot point for a lot of our readers anyway, since the reader is only available in Japan, for the local equivalent of around $40.

Anything running Honeycomb or later should be able to take advantage of USB host mode, which (in theory) allows just about any USB storage device to be hooked up and accessed with a file manager. This being the case, most Android tablets can access the ports added by this little gadget with either a cheap adapter or a first-party accessory to do the job. Of course, those aren’t quite as flexible as Sanwa’s device, but I’d bet yen to donuts that they’re more reliable.

[via Everything USB; via TalkAndroid]