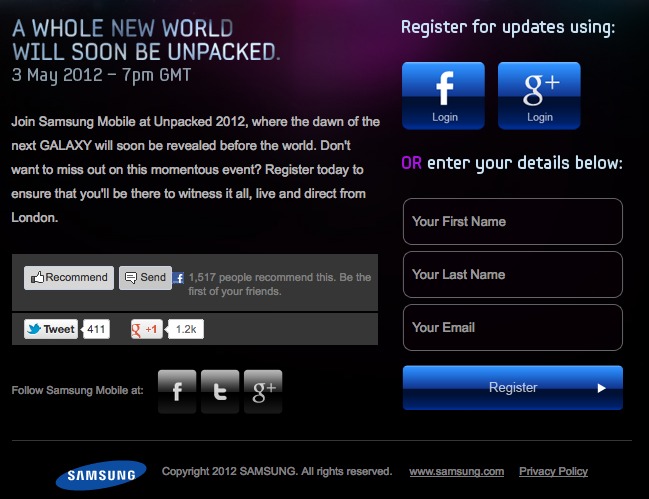 Samsung is hitting the advertising hard and building the hype for “The Next Galaxy” most likely to be called the Galaxy S III. With the little hints they’ve released over the past 24 hours we are starting to get excited. Today they’ve launched the sign-up page for those that want up to the minute details as soon as they are available.

After posting a teaser page and message on Facebook, early this morning they released a teaser video but didn’t share too many details on the upcoming super-phone. If you missed that epic video I’ve added it again below for your enjoyment. You might have seen the video, but not everyone has mentioned the sign up page so head to thenextgalaxy.com for all the information.

You can sign up for details and emails regarding the next Galaxy, but they probably won’t be sending anything good until after the launch event coming on May 3rd. It looks like they are sending links to watch the announcement and phone unveiling live when the time comes, but that appears to be all so far. Again all news you can handle is linked to below, and we’ll be in London live for the official event so stay tuned right here at Android Community.