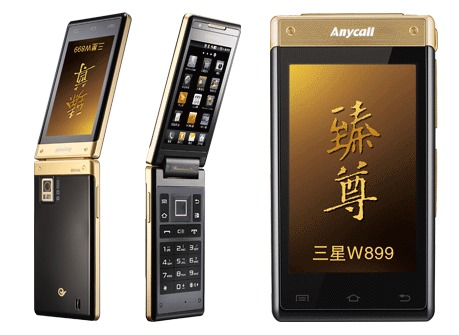 Samsung has outed a new dual Super AMOLED clamshell smartphone, the Samsung W899, running Android 2.2 on a 1GHz processor. Initially destined for China, the W899 packs CDMA/EVDO and GSM/UMTS connectivity, WiFi and mobile hotspot functionality, but its most interesting feature is the fact that it has a 3.3-inch touchscreen on both the outside and inside of the flip.

That means users will be able to choose between on-screen controls or the physical numeric keypad on the inside. There’s also a 5-megapixel camera, GPS and a microSD card slot. It measures 17.55mm thick, and will be available on China Telecom; no word on when – or if – the Samsung W899 might make it to North America or Europe.