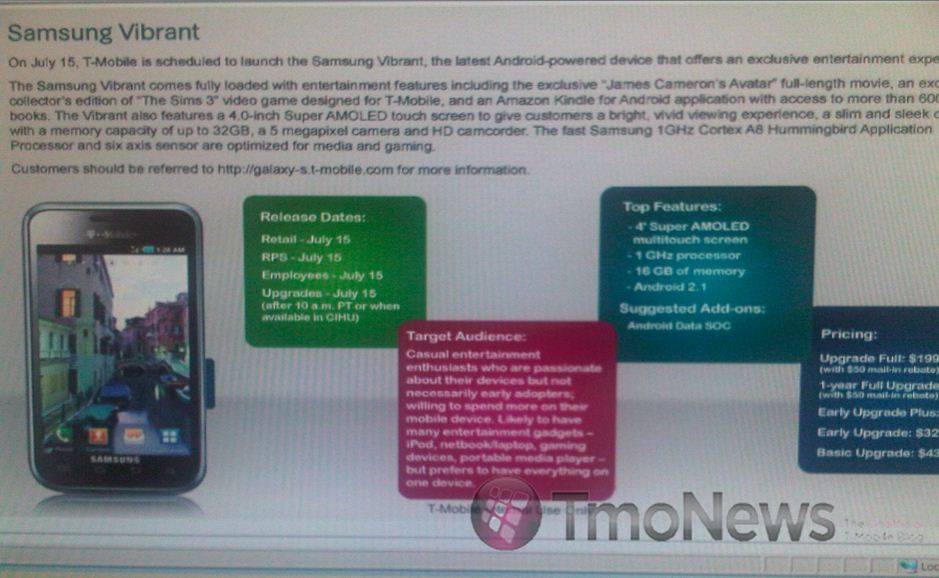 When the Samsung Vibrant was initially announced, it was confirmed by Samsung that the 4-inch Super AMOLED display, Android 2.1, 1GHz Hummingbird processor-based device would be available for T-Mobile customer purchase starting July 21st. And, as far as we could tell, there wasn’t anything wrong with that date at all. Then again, Motorola’s got their own launch happening on July 15th, with the Droid X ready to change everything all over again, so maybe Samsung saw that as a bit of a road block. Well, if rumors are true, then that’s about to get a bit more interesting.

When this rumor first broke, last night, it was simply just rumor: basically, an anonymous tipster said “something,” to the effect that the Vibrant would be released on July 15th. It didn’t get interesting until a leaked T-Mobile internal document hit the scene, and thanks to the fine folks over at Tmo News, that leaked document made its way to the Internet. And, sure enough, it says that “on July 15th, T-Mobile is scheduled to launch the Samsung Vibrant.” Doesn’t get more clear-cut than that, we imagine. But, yes, this could be a major typo, too, so make sure you’ve got some salt near you at all times.

So, what’s the benefit of launching the Vibrant pretty much a week earlier than expected? For one, the Droid X by Motorola is launching on the nation’s largest wireless carrier. That’s going to be a huge release, no matter what stick you shake at it, so it would be good for T-Mobile to jump on the “big Android phone-packing” bandwagon. Especially considering the Vibrant’s got a few more features that some people may consider better than the Motorola adversary’s. So, now it’s up to all of you: if the Vibrant does indeed launch on the 15th, and you’ve got an option, which are you choosing?