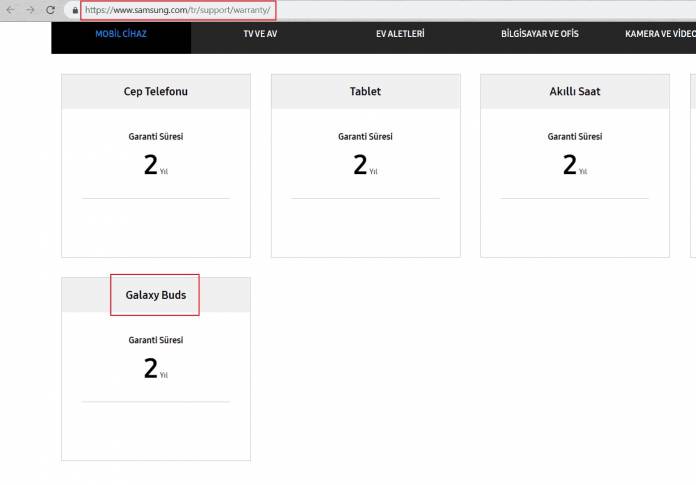 While all eyes will probably be on the announcement of the new flagship smartphones Galaxy S10 and maybe the foldable Galaxy F, expect Samsung to also unveil some “surprise” new products pretty soon. One of those rumored to be announced during their Unpacked event this February is the successor to the Gear IconX ears, currently known as the Galaxy Buds. Now one of Samsung’s own websites seemingly confirms the arrival of these new wireless earphones. Well, sort of, in a roundabout way.

A German website says that the Galaxy Buds with model code SM-R170 can already be found on Samsung’s official Turkish website. However, you won’t find it on the front page or anything but rather on the warranty information page and the only information you’ll get there is that the Buds will have a two-year warranty, which is not exactly anything exciting. Other than that, the Buds still officially remain a mystery.

Previous rumors have stated that the Galaxy Buds are the successors of the Gear IconX and that they are wireless Bluetooth 5.0 earphones with 270 mAh battery that can be charged in the box that it comes with. It will also reportedly have 8GB of internal storage which is the most that they have ever given any of their Gear products, including smartwatches, trackers, etc.

It would be interesting to see why they would give that much of storage for the Galaxy Buds, if that rumor was true at all. We have a few more weeks to have our ears on the digital ground and see what else we will find out about this new product. And of course all will be revealed during the February 20 Galaxy S10 unpacked event.