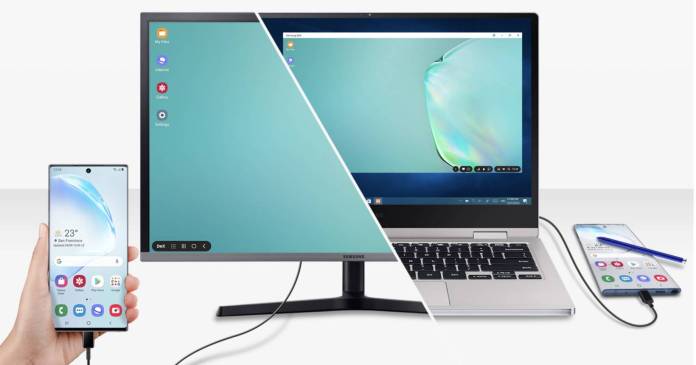 If you’re a PC or Mac user who has found the Samsung DeX software a great way to use your Samsung smartphone on a bigger screen, we have bad news for you. It looks like the Korean OEM has decided to discontinue this software as they have added a notice on their website that the DeX for PC service will stop working by January 2022. The only option for computer users now is to use a DeX dock or connect their phone with a USB-C to HDMI cable.

If you’re not familiar with Samsung DeX, it’s actually one of the best productivity apps from the company, at least for their smartphone and tablet users. It lets you connect your mobile devices to a bigger display like a monitor or TV and gives you a desktop-like UI. The DeX software lets you connect it to your computer running Windows or macOS if you need to use some of the apps or files on your mobile device on the laptop or desktop you’re using.

But now the good days are over for those using DeX on their computers. Samsung will stop supporting the software on those running on Windows 7 and older and macOS. It’s probably not a surprise anymore for those who regularly use it as mac users have started receiving pop-up notifications about this latest development. The DeX website also now has a small notice saying it will be “terminated” by January 2022.

If you already have it installed, you’ll be able to still use it after then but there will no longer be any support for it or any future updates. Windows users can update to Windows 10 if they want to continue using the updated version. macOS users cannot download the software anymore and there’s no news if it will be available later on for newer software versions of Apple’s computers. For now, you can connect your Samsung smartphone to your monitor through the DeX dock or by cable.

There’s no explanation as to why Samsung is discontinuing the DeX software for these particular computers. There may be plans to release a new version for new computers but for now, there’s no news from them.