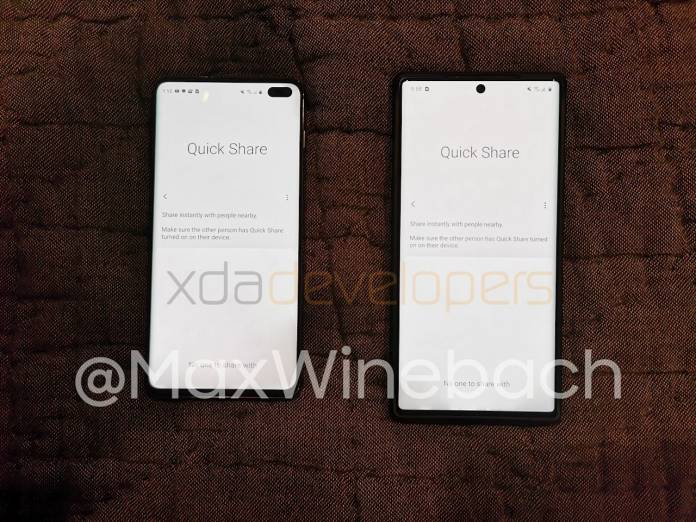 Even as we wait for Google to come up with a convenient and quicker way to share files between Android devices, Samsung might just beat them to the punch. It appears that the Korean OEM is working on something called Quick Share, their very own version of Apple’s AirDrop. This will allow Galaxy devices to quickly share (as the name suggests) things like photos, videos, and other files. This feature will reportedly launch with one of the upcoming new flagship device, the Galaxy S20+.

XDA Developers found an APK to get Quick Share running on some Galaxy phones but it wouldn’t work as intended just yet, probably since the APK wasn’t meant for the test devices. But on paper, it should work just like the other nearby sharing services. It will let you share photos, videos, and files if another Galaxy device is near yours. You can set it up to just share with contacts that are in your Samsung Social contacts or you can share it with everyone as long as they have a supported device near you.

But unlike most of the file sharing services available now, Quick Share has a cloud sharing component. It will temporarily upload files to the Samsung Cloud then it will be streamed to the Samsung Smart Things devices and then downloaded locally. You can share files as big as 1GB but you can only send up to 2GB of files per day. What we don’t know is how long they will be temporarily on the cloud and if it will be automatically or manually deleted.

Quick Share will probably be launching with the Samsung Galaxy S20+. XDA Developers were able to get the APK for the test device so we don’t know if that’s the only Galaxy device that will initially have the service. But most likely, when Samsung launches One UI 2.1 later on, all Galaxy devices will also be able to use it to transfer files to other supported Galaxy smartphones and tablets.

We’ll have to wait and see if Google’s supposed file sharing service, Nearby Sharing, will launch ahead of Quick Share. Obviously, the latter will only be useful for Samsung Galaxy users while the former will benefit all Android users.