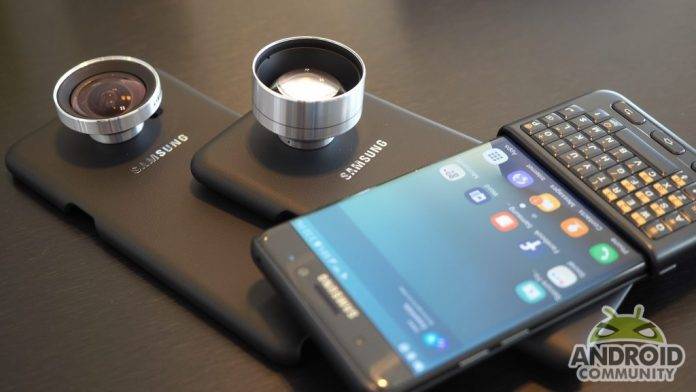 Samsung may be changing its marketing strategy by releasing only one premium flagship phone instead of several but the company isn’t stopping to think of ways to make more money. Adding a dual lens rear-facing camera and iris scanner to the next Galaxy S8 is one of the main plans for next so the South Korean tech giant will be able to make up for the recent losses.

The Note 7 is the first Samsung phone to have an iris scanner. The new Note was only made available for a few weeks but its other features are still expected to rock. Sadly because of the problem it’s now facing, some features and functionalities have taken a back seat. Other Samsung businesses are also affected like the Gear VR, Samsung Cloud, etc.

As for the dual lens camera, Samsung is believed to be using it on the Note 7. This is somehow expected since most Note features are added to the following year’s S flagship models. Upgraded imaging is a must since avid high-end Galaxy phone fans want that for a mobile camera system and Samsung doesn’t disappoint in that area.

Adding more megapixels won’t always mean photos will come out great. The software and phone technology (plus skills of the photographer) determine the photo quality and composition. Samsung using an upgraded dual-lens camera will certainly be an improvement.

Using dual-lens camera is expected to help not only Samsung but also other suppliers when it comes to revenue. Hopefully, adopting the technology will improve the revenue since two separate camera modules will be needed. Dual lens camera may add a few dollars to the final price of the Galaxy S8 but there’s also a chance it won’t. At this point and moving forward, Samsung’s strategy needs to be enhanced.

Samsung hasn’t confirm such plans yet but if and when true, we know they will be good not only for the phone company but also for suppliers and module makers who were also affected because of the Note 7 crisis.

Suppliers like Kolen and Sekonix (iris camera) and Partron and MCNEX (iris sensors) will likely benefit from this change. We’re positive that iris recognition will be bigger next year while dual lens imaging will also be in full swing since other major phone companies like LG and Apple have already used dual-lens camera in their premium flagship models such as the V20 and the iPhone 7 Plus. Next year, the Samsung Galaxy S8 will probably have it.