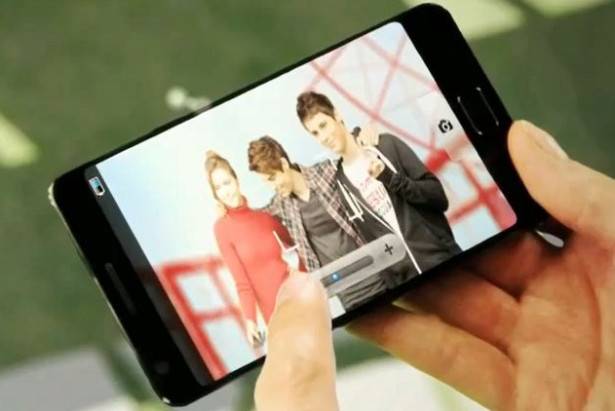 We were present at Samsung’s CES press conference last Monday, but even we didn’t spot the little gem that All About Samsung did: a previously unseen device shown off in a WiFi camera promotion. Is this the much-rumored Galaxy S III, or just a fanciful mock-up made for the CES presentation? You be the judge. Or rather, I will, since I’m writing this here article.

The device on display seems “real” in the physical sense, but the image it’s producing is almost certainly fake. Looking closely at a freeze frame betrays a bezel that’s uneven (not to mention ludicrously thin) and the basic Android/TouchWiz interface standbys like a signal meter are not present. In all likelihood we’re looking at a dummy unit with a placeholder screen and graphics overlaid digitally, with an actor just playing along.

All that said, the Galaxy S III is absolutely coming, and probably sooner rather than later. If Samsung’s leap from the original Galaxy S to the S II is any indication, we can expect a thinner profile, updated software and a larger screen – though it can’t get too much larger without being essentially a smaller version of the Galaxy Note. Previous rumors pegged it to have a 1.8Ghz dual-core processor, a 4.6-inch 720p Super AMOLED display (matching the Galaxy Nexus) a 12MP camera and an unbelievable 2GB of RAM.

It’s certainly possible that the device in the video (around the 6:40 mark) is the GSIII, but with so little official information available, a glimpse is all we’re getting for now. Samsung is expected to reveal the Galaxy S III formally at Mobile World Congress in February, the same venue that the Galaxy S II got last year.