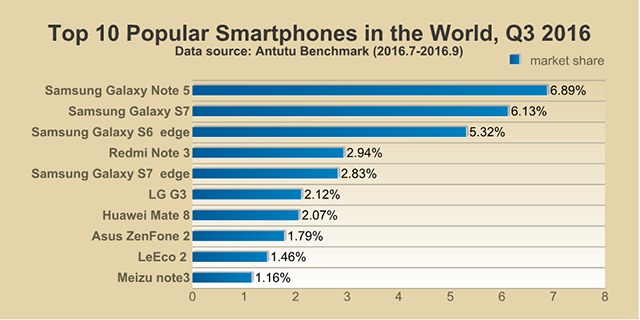 The effects of the recall and subsequent stop production of the Samsung Galaxy Note 7 will probably not reflect yet on sales figures for the 3rd quarter of the year. Given that, the Korean brand should enjoy their continued dominance in Antutu’s report of the global sales for smartphones from July – September of this year. Global sales saw that Samsung devices are till very popular, but Chinese brands like Xiaomi, Huawei, LeEco, and Meizu are gaining traction and becoming more popular, not just in their native country but even some outside of Asia.

The Galaxy Note 5 was the top-selling phone globally according to the data Antutu was able to gather. Hot on its heels are two other Samsung products, namely the current flagship, the Galaxy S7 and last year’s curved flagship, the Galaxy S6 edge. The Redmi Note 3 from Xiaomi meanwhile keeps making inroads, and is in fact the top phone in several markets, including China, Hong Kong, Russia, India, Vietnam, and Malaysia.

The dominance of these specific smartphones also indicate that users are going for the bigger screens and since the supposedly new kid on the block, the Galaxy Note 7, kept overheating on us, we may see the Galaxy Note 5 still be dominant in the last quarter of the year. Given they don’t have any other Samsung alternative, at least when it comes to larger screens, users may still be drawn to it, unless they move out of Samsung territory.

As for the US market, the Google Nexus 6P was still top dog, but four Samsung devices made it to the Top 10, including the Galaxy Note 4 and Galaxy Note 5. We wonder how high the Galaxy Note 7 would have placed if it didn’t have parts that overheated and caught on fire. The data that Antutu released is from those submitted by users and analyzed by their lab.