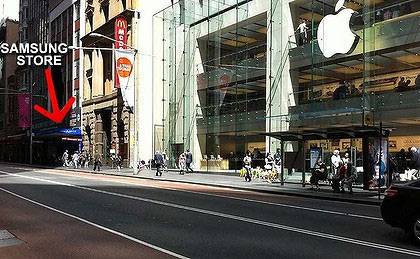 Samsung figured it would take the chance to do a little scrapping out behind the gym with Apple with the iPhone 4S set to launch in Australia this week. Samsung set up a little pop up store right next door to the big Apple Store in Sydney and then offered the very nice Samsung Galaxy S II smartphone in limited quantities for $2. Apparently, the geeks in Australia were more interested in the Android smartphone than the iPhone 4S.

Apparently, the Samsung store is up and running until this Friday and then it will close. You had better count the folks that are in line to be sure you need to stand around at all if you want one of the smartphones. The iPhone 4S will go on sale in Australia this Friday so the Samsung store is closing as the iPhone 4S gets ready to start selling.