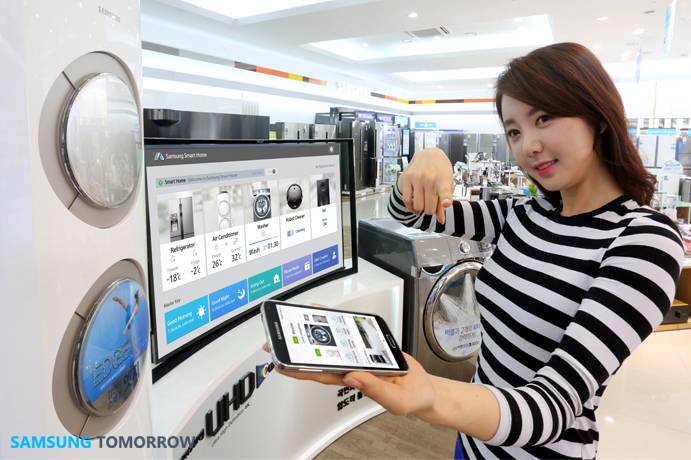 Keeping up with its efforts to have a Samsung-filled living experience even at home, the Korean manufacturer has announced its Smart Home Services. Part of this service is the Smart Home app that will let home owners connect to and control their smart appliances using their smartphones, tablets, or even smartwatches.

Home automation has a long been a dream in the tech world, and it is slowly, very slowly, becoming reality, starting with smart TVs, some not so popular smart appliances, smart thermostats, and now even smart bulbs. However, managing all these disparate pieces of equipment, no matter how smart they are, is a bit of a chore. And that is where Samsung Home Services comes in to offer one app to rule them all. Provided you are using Samsung-branded equipment, of course.

The apps that are part of the service allow appliances and devices to work in unison with each other. Of course, you can still control them separately, like setting up the washer before you leave the office. The real magic, however, happens when they all work as one. For instance, saying “good night” to a voice-enabled smart TV remote control will not only affect the TV itself but also other appliances like the newly announced Smart Bulb or the air conditioner.

Samsung will be rolling out the Smart Home Service first to Korea and the US, and eventually to other regions as well. The Smart Home apps is now available for Android devices via Samsung Apps and Google Play Store as well as for the Gear 2 smartwatch. An app for the company’s 2014 line of Smart TV will follow in April. Samsung also intends to make the service available to the Smart Bulb, vacuum cleaners, and the Gear Fit smart wristband in the near future.