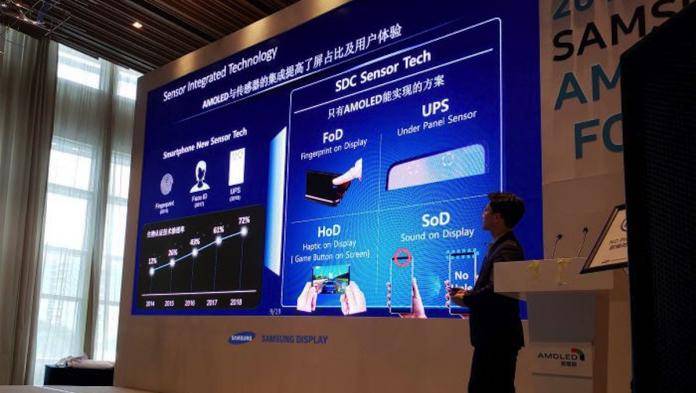 Samsung is set to introduce new technologies in 2019. We’re looking forward to that Galaxy X foldable smartphone and the Galaxy S10 variants with Fingerprint On Display. It’s going to be an interesting year as the tech giant is at the forefront of new mobile phone design. A recent post on Twitter tells us some information about what was heard during the 2018 Samsung OLED Forum which happened in China last week. Source Ice universe (@UniverseIce) shared the good news that the South Korean tech company has established its phone design direction.

Specifically, the Samsung Display team showed off what they have planned for 2019. Of course, the event is focused on Samsung OLED and it’s good to know of the plans to launch an under-display camera.

It has been a subject that’s been talked about for years now. Finally, we’re crossing our fingers, Samsung will make it public and commercially available.

The SDC Sensor Tech consists of an AMOLED panel that we’re guessing will feature one of each or all of them: Fingerprint on Display, Under Panel Sensor, Haptic on Display (Game Button on Screen), or Sound on Display.

The Smartphone Sensor Tech will allow Fingerprint, Face ID, and UPS. Looking at the presentation, we don’t see any notch at tall so that would be good riddance.

Great news! Samsung established the direction of mobile phone design in 2019!
On October 18th, Samsung Display invited about 20 customers to hold the "2018 Samsung OLED Forum" at the Shenzhen Marriott Hotel in China. At the meeting, Samsung showed a PPT pic.twitter.com/sYu0ORTd6V