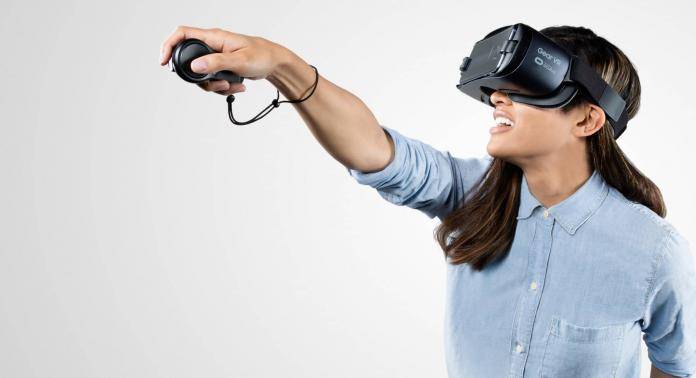 Apart from Google, you can readily pinpoint the companies and mainstream manufacturers that have contributed to virtual reality (VR) technology and made inroads into the growing industry. Samsung jumped on to the VR bandwagon early, partnering with Oculus for their Gear VR headset. This headset is of course powered by their flagship smartphones, but even the powerful hardware in their phones – particularly the AMOLED display technology therein – couldn’t prevent what is called in VR as the “screen door effect” (SDE).

When immersed in a VR environment, the seamlessness of imagery is needed to keep your eyes and you mind believing in the “reality” of what is being shown. This experienced can commonly be impacted negatively by SDE – which are fine black lines that you notice in the background of a VR environment. These are actually the spaces between individual pixels, which gives the effect of looking at the image through a mesh screen door, hence the name.

If all evidences hold true, Samsung is trying to rectify this through what they are calling “Anti SDE AMOLED” display technology, which sounds specifically for VR. The Korean gadget giant has evidently filed a trademark application for the “Anti SDE AMOLED” term and trademark at the European Union Intellectual Property Office. The name suggests that Samsung will be – at the very least – marketing one of its products with this feature. This brand name looks to be used for a specific type of AMOLED screen that will not have the “SDE” phenomenon in VR.

To date, Samsung has gone toe to toe with Google and LG in creating pixel-dense displays. The LG and Google partnership has come up with an OLED display that packs 1,443 pixels per inch in a 4.3-inch display. Samsung has also come out with its most pixel-dense display yet – a 2.43-inch panel with a resolution of 3840×2160 pixels, which amounts to a pixel density of 1200 PPI. From the looks of it, it looks like VR is going to get a much-needed shot in the arm when these displays hit the market.

Samsung’s “Anti SDE AMOLED” could just be the proper brand name for the display we mentioned above, which they announced at the SID Display Week 2018 a month ago. Or, it could be a totally different technology, something which the company has not announced officially yet. We will need to keep tabs on this tech as the information slowly trickles out from Samsung.