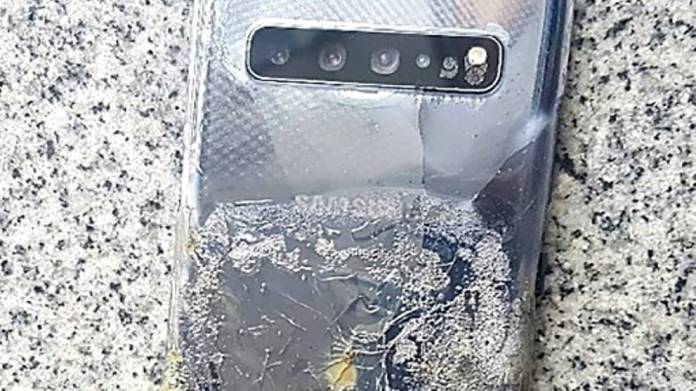 Every time Samsung probably receives a complaint that one of their devices caught on fire or burnt up, they must be having flashbacks to the whole Galaxy Note 7 brouhaha from a couple of years ago. One user from South Korea has now accused their Galaxy S10 5G of burning up without any reason. After investigating, Samsung claims that it wasn’t a device malfunction but rather “external impact” that caused this problem and they are refusing to reimburse the user for the smartphone.

A user with the last name of Lee posted pictures of a charred Galaxy S10 5G, claiming that he did not do anything for the device to catch on fire but it still burned up all the same “without reasons”. When he saw that smoke started coming out of the device, he picked it up but it was too hot and so he dropped it on the ground.

But Samsung told the AFP that it was not an internal glitch but there must have been an external element that caused the damage to the device. Lee said that the Korean OEM is refusing to reimburse him for the device which costs around $1,200. The device is being marketed as the first smartphone to have built-in 5G communications.

If you recall, this isn’t the first time that Samsung has faced problems like this. The ill-fated Galaxy Note 7 had a malfunctioning battery that caused devices to catch on fire, forcing Samsung to do a global recall and badly affecting sales since then. Whether or not this new case is Samsung’s fault, it’s still bad publicity for them.

And speaking of bad publicity, they were forced to cancel the launch of another upcoming device, the Galaxy Fold with its foldable display. They were pretty excited to release it to the market until early reviews from media and bloggers showed that there were a lot of bad screen problems and so they will be making further improvements before launching it.