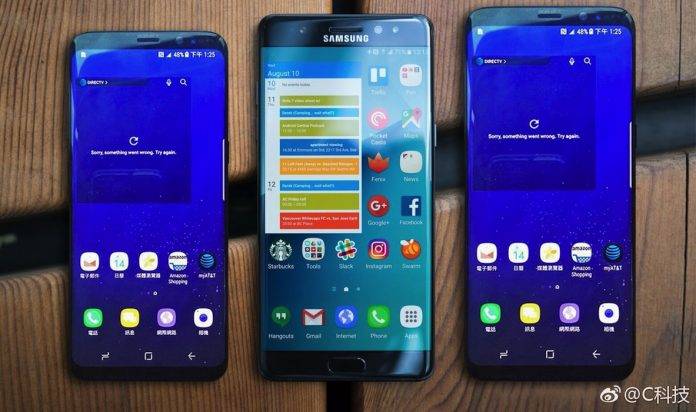 This year’s premium Galaxy S phone has been delayed but we know it will be one great phone although we’re not sure if we’ll totally be impressed by it. I’m reserving my thoughts until the official launch and until we get our hands on one. We’ve been imagining how the Galaxy S8 and S8+ will look like. We have a feeling they will also be compared to the discontinued Galaxy Note 7 and last year’s Galaxy S7 Edge.

To give you an idea, the photo above shows us three flagship phones: the upcoming Galaxy S8, the ill-fated Galaxy Note 7, and the Galaxy S8 Plus. Somebody shared the image on Weibo and we’re interested to know how the three would fare against each other.

The Galaxy S8 will arrive together with the Galaxy S8+ in April 21. It will be the market release but official announcement will happen on March 29. Pre-order will begin on April 10 according to an earlier report. So far, here are the specs and features we know: Qualcomm Snapdragon 835 processor, 4GB RAM, Android 7.0 Nougat, soft keys as virtual buttons, integrate Bixby AI, same battery capacity as the Note 7, and a have a bigger and better display.

Update: The earlier version of this article said the device on the right is an S7 Edge. It’s actually a Galaxy S8 Plus. Apologies for the confusion.