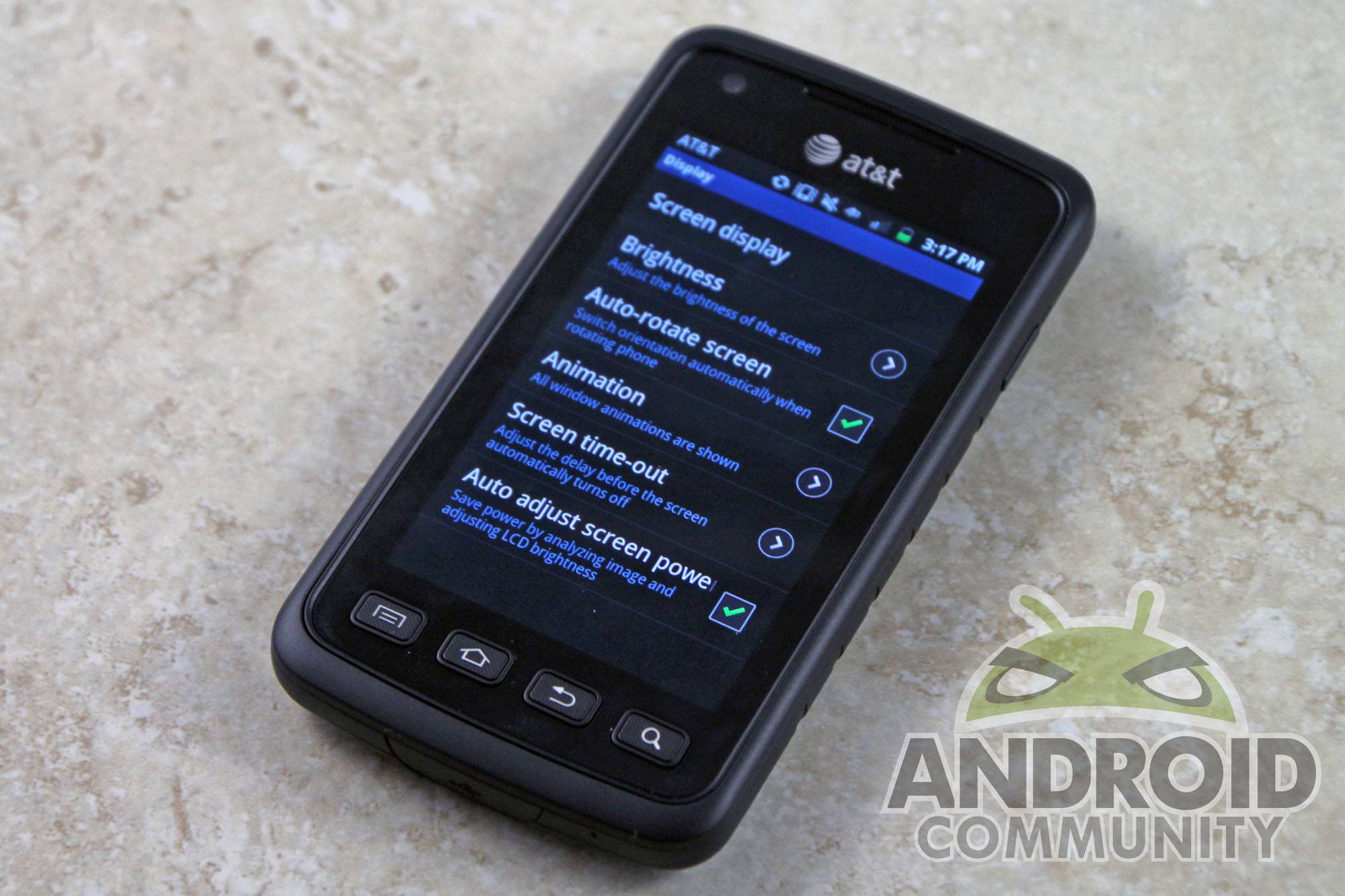 We in the tech media industry tend to focus on the ultra-high end, because honestly, it’s what people want to read about. But considering Android’s more democratic applications, at Android Community we also like to focus on a wider range of phones for those who either don’t want, don’t need or can’t afford flagship devices. If you find yourself among this company and AT&T is your carrier of choice, you’d do well to investigate the Samsung Rugby Smart, a 3.7-inch Gingerbread phone with basic features and a ruggedized exterior.

If you’re looking for a phone that will wow onlookers with grace and style, the Rugby Smart isn’t it.  The outer casing makes it look like the illegitimate offspring of an LCD monitor and a hand grenade. But that’s kind of the point: the Rugby Smart is intended to be a phone that can take a beating without complaint. And on that point, it scores. Between impact-absorbing sides, a waterproof casing (it can handle up to 30 minutes submerged in a meter of water) and a completely enclosed design including protective tabs, a locking battery cover and sealed physical navigation buttons, this phone might very well survive in the middle of a rugby match. 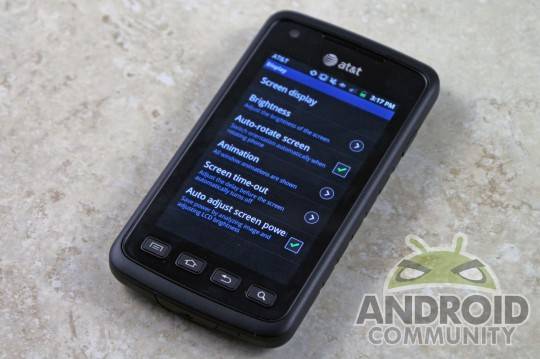 All that being the case, it still hats all the checkpoints of a modern Android phone. The back case and battery are removable by means of a recessed lock, the charge and headphone ports are accessible (if not easily so) under plastic protectors. An empty MicroSD card slot is found directly under the battery, making it a bit of a pain to swap cards, but no more so than on many earlier Android phones. Even the ergonomics are preserved with Samsung’s standard power on left, volume on right button layout. As an added not to utility (and perhaps my favorite feature) holding down the Volume Up button when the phone is off turns on a the LED light for a quick flashlight. This is a popular modification, but Samsung includes it by default  – awesome! 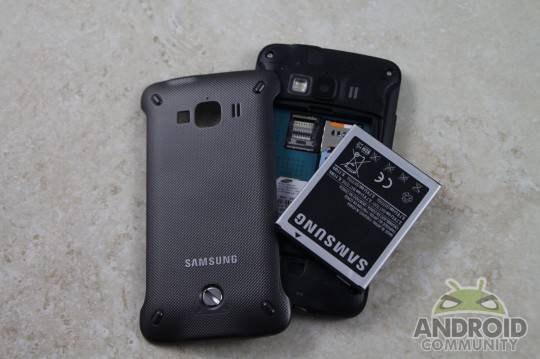 Underneath the plastic and rubber, the Rugby Smart is a typical low-to-mid range Android phone. A 1.4ghz processor is quite speedy for a single-core machine, and 512MB is enough to run Android 2.3 and TouchWiz comfortably.  Just 4GB of storage combined with an empty and tough-to-reach MicroSD card means that this isn’t a media phone, unless you’ve already transitioned your music to the cloud. The rear camera is 5 megapixels (720p video recording) while the front-facing camera is 1.3 megapixels – impressive, since on a rugged phone it might not even be there. Samsung’s typically excellent Super AMOLED technology is in fine form, and if the resolution is low at 800×480, it’s only because the screen is relatively small – this is the same size and density of the original Nexus One and HTC Incredible.

If you’ve used Samsung’s TouchWiz over Gingerbread, you know what to expect here. There’s nothing more or less than Samsung and HTC’s standard Android compliment. That said, the extra processor speed seems to handle is all with commendable speed for a mid-range device. TouchWiz is as it ever was, a mix of high-gloss additions that are either slightly hands or ignorable. I’m a big fan of the built-in screenshot feature, which isn’t a standard on Android phones, and the power menu embedded into the drop-down bar, which is so common among skins and ROMs that I’m amazed Google hasn’t already adapted it. 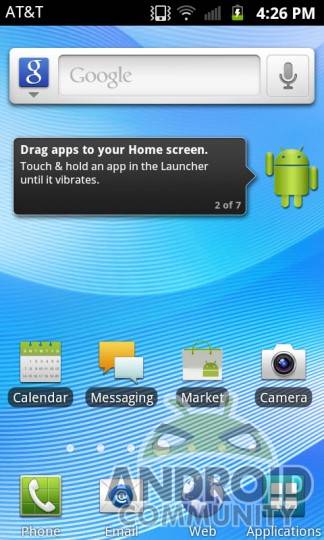 The rest, like the lockscreen and launcher, I could do without. At least in this version it doesn’t give an iPhone-style box to every icon. The abundance of widgets activated by default makes the launcher sluggish even the first time you turn it on. There’s a hearty amount of bloatware present, but anything that’s not made by Samsung or AT&T (about half of the included, non-stock Android apps) can be uninstalled. The rest, like the baffling AT&T Navigator and Featured Apps, will remain unless you root.

Oh, and the Rugby uses MTP instead of the standard USB mass storage, for some reason. Boo.

The Rugby Smart has a 1650mAh battery, a generous capacity perhaps made possible by a body that isn’t trying to be the thinnest around. AT&T claims 8 hours of talk time and a little over two weeks of standby time, and I wouldn’t dispute that. The little phone got through a full day’s use with 30% remaining, which is nice, but it doesn’t have a huge screen or an LTE radio bogging it down, either. The bottom line is that you won’t be searching for a charger unless you download gigabytes of files or talk for hours on end. 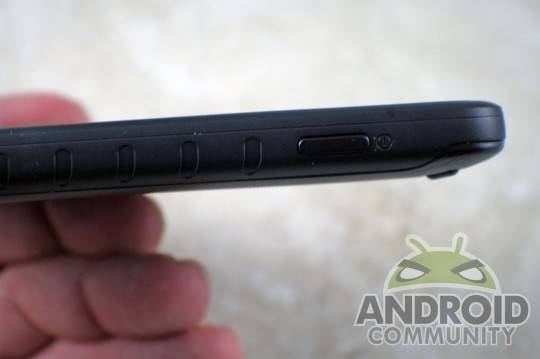 And speaking of talking: the reception on the Rugby Smart isn’t great. My house is in a 1-2 bar AT&T area, so it makes a perfect testbed for poor signal. The Rugby Smart would drop calls on a regular basis. However, once it found a stable connection the clarity wasn’t too far below the standard level of AT&T phones. If you live in a well-covered area, it should be fine. That said, if you’re prone to long, extended calls, there’s probably better options out there.

A 5MP camera isn’t the greatest out there today, but for a $100 phone, the Rugby’s sensor is pretty good. Even in indoor light it manages to be relatively clear. It won’t beat out the Galaxy S II any time soon, but then it doesn’t really have to. Snapshots and video are both above-average, even if it’s not as high res as some might like. The speaker on the back is surprisingly loud considering that it’s as waterproof as the rest of the phone, as is the earpiece. Those who use their phone as a speaker will be pleased. The hard-to-reach SD card is still a bit of a downer for those who constantly swap in different audio or video files. 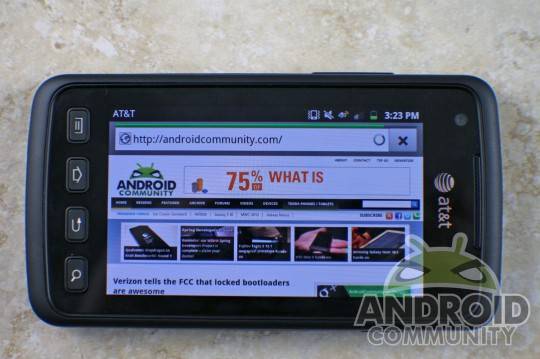 For $99.99 on an AT&T contract, you’ve got a few options. If you want 4G LTE, the HTC Vivid is an excellent choice. Those who need more power can opt for the Motorola Atrix 2, and those who want a big, beautiful screen can choose Samsung’s own Galaxy S II. But for someone who wants a small and relatively cheap phone without dipping into the tiny and low-power sections of the market, the Rugby Smart is a good fit. Its compact size should suite plenty who want a middle ground, and the tough construction (while keeping a reasonable thickness and usability) make it an attractive choice for anyone who works or plays in an active environment.

There are a few downsides to this, most notably the technically accessible but hard-to-reach battery bay and SD card slot. And if you frequent low-signal areas, odds are you’d be better served by something else. But for those who want a small phone with decent power that’ll take a beating and still look good, this is it.