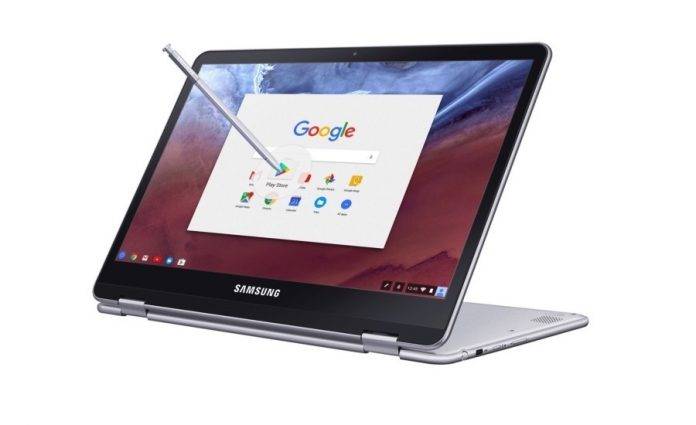 It’s about time Samsung delivers something that will rival the Surface Pro and the iPad Pro. Not that the company really needs to but apart from its high-end Galaxy Tabs, there’s no tablet that can be considered premium and capable enough to use for one’s heavy work or computing needs. Over at the CES, the South Korean tech giant announced two new Chromebooks–the Chromebook Pro and Chromebook Plus. These devices work as ordinary laptops that can also be used as touch tablets.

The new Chromebooks’ touchscreen display can do a 360-degree rotating action so you can carry each model like another tablet. Each one runs Chrome OS which means they now have support for the Google Play Store which then means most Android apps can run on the tablet. These Chromebooks promise “power and productivity of a laptop” but with the “flexibility and versatility of a tablet” as described by Samsung.

Google and Samsung worked hard on this pair that is expected to reign supreme in the Chromebook game. That is, if people will be willing to spend a bit more. For a Chromebook, the $449 price tag is high already. Most Chrome OS notebooks we know are below $350. We’re close to calling the two as full-blown laptops already because of the price and specs.

We’re guessing the Chromebook category is expanding from a low-cost notebook to reliable work laptops already. It’s only a speculation but the Chromebook Plus and Pro names alone show the change. Each Chromebook boasts of high-quality hardware, lightweight design, portability, full-size keyboard and trackpad, and a Quad HD 2400 x 1600 resolution display screen. The display is also topped by Gorilla Glass 3 for touchscreen capability.

You can find two USB-C ports that allow 4K video streaming and connectivity. The Chromebooks are really powerful as they allow users to take advantage of the multitasking multi-window features so they can do more simultaneously on a single screen.

The Samsung Chromebook Plus will be ready from Best Buy and other retailers in the US for $449. The Pro version will be out in Spring with the same pricing (hopefully).