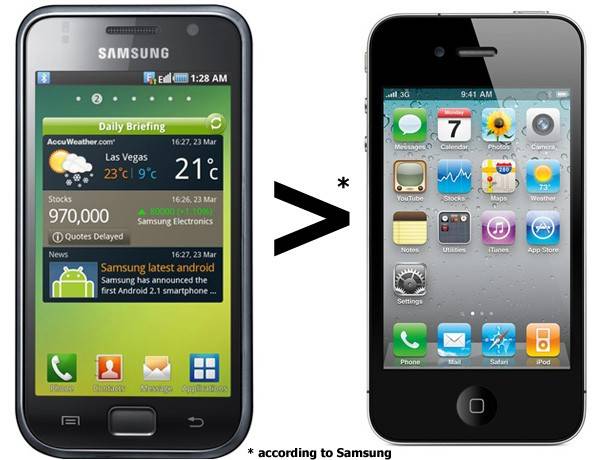 At the keynote presentation for the iPhone 4, Steve Jobs took a few shots at other displays for not being as good as the Retina display that is on the new iPhone. Many people took exception to these claims and finally someone has responded to these allegations. Samsung especially says, “The Retina display isn’t that great, AMOLED is better”. Well, this isn’t an exact quote but they are saying something along those lines.

By Mr. Jobs own admission, the 326ppi is out of the range of the human eye. Samsung quickly points out that the human eye cannot differentiate between300ppi and 400ppi. This fact renders its ability to produce 326ppi completely useless in the real world. While the iPhone 4 display does offer a 3 to 5 percent advantage in sharpness over the Galaxy S. it does so9 while sucking 30 percent more power which means lower battery life. Furthermore, a screen size of 3.5 isn’t big enough for you to fully enjoy the benefits of such a high resolution display.

Samsung believes its screens offer better viewing angles and contrast. The iPhone’s display while impressive isn’t better than AMOLED technology. And to add more fuel to the flame, the iPhone 4 seems to be geared more towards gaming. The Samsung Galaxy S has a GPU that is capable of XBOX 360 like graphics. I would say the Samsung has nothing to worry about when it comes to the new iPhone, the only advantage it has over it is a camera flash.