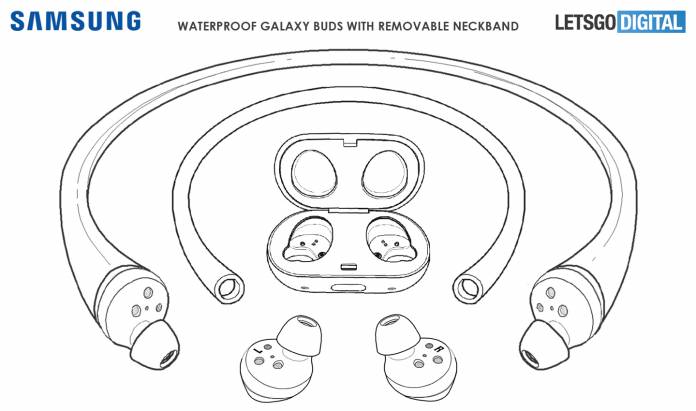 While one of Samsung’s newer truly wireless earbuds, the Galaxy Buds Pro, has an IPX7 rating, it is not recommended to be used in the swimming pool. There are of course those who would like to have something to use while practicing their laps or doing their water-based exercises. It looks like the Korean OEM is developing a new pair of waterproof Galaxy Buds that have a detachable neckband so you can be used in the water for a longer period of time.

According to Dutch website Let’s Go Digital, Samsung is currently working on a Galaxy Buds Waterproof Neckband Earbuds that can be used in the swimming pool. It will still be the earbuds type of audio accessory but can be used with an attachable neckband for underwater use. The source is a utility patent that was filed with the World Intellectual Property Organization last March 3, 2021 but has now been published.

The patent is for a “Wearable device that can be worn on ears of user, and accessory for supporting communication thereof” and the documents show how it can be used underwater while swimming and other activities. The patent images show Buds similar to the Galaxy Buds+ that were launched alongside the Galaxy Note 10 series and the smartphone looks like a Galaxy S10+ but they’re most likely for illustration purposes only.

The earbuds have several built-in mics, sensors, and a 2-way speaker. The flexible neckband is similar to the hollow neckbands of Samsung’s U Flex headphones. This means wireless communication can be used while underwater. Aside from taking calls and listening to music, the possibilities include being able to use it to track health information as well like speed, momentum, calorie calculation, etc.

It’s still unclear though if Samsung intends to release this kind of audio product in the future as having a patent doesn’t necessarily guarantee production. Still it would be interesting to see earbuds with a neckband accessory for those who want to still be connected even while underwater.