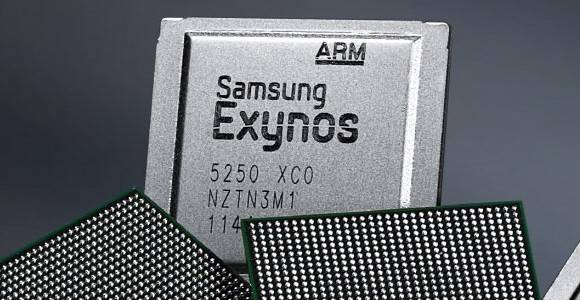 If the 22nm process for the Intel Haswell chips have you excited, Samsung might just have you downright giddy. News out of South Korea suggests their new Exynos chipset will be a incredible 14nm, which would bring a host of desired features for mobile devices.

When considering chipsets, the “nm” moniker has to do with how much can be packed into the architecture. In a nutshell, the smaller the “nm” number is, the better the power consumption the chipset can be. Intel’s 22nm process for their new Haswell chips brought improved power efficiency, but didn’t sacrifice processing time.

A good example is the Macbook lineup, specifically the Macbook Air. The inclusion of Haswell chips brought a battery time that surpassed even Apple’s less-than-modest claims, routinely giving 10-hours or more on a charge with no compromise for processing power. When it comes to our mobile devices, we’d love to see better battery life, no matter the device.

We also need to keep our devices powerful enough to keep up with demand. As the lines between mobile and desktop blur, so should the processor specs. Samsung did a good job with the A7 chipset in the new iPhones, so another step forward will be interesting to see.