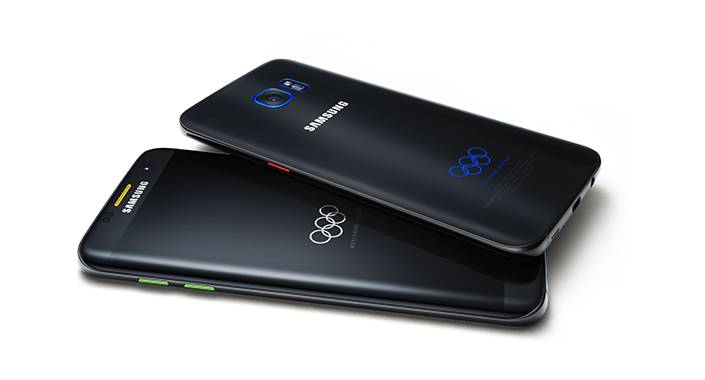 The 2016 Summer Olympics is just a few weeks away and so you can expect not just countries, but probably most especially brands to start hyping up their own campaigns. One of the constant WorldWide Olympic Partners (for the Wireless Communication Equipment section in particular) is Samsung and as part of their Olympic spirit for this edition, they will be releasing a limited Olympic Games edition for one of their flagships, the Galaxy S7 edge. It is now available for purchase in selected regions including host country Brazil.

Officially called the Galaxy S7 edge Olympic Games Limited Edition, this is actually the first time that Samsung will be releasing a themed design for a device as it incorporates the color scheme of the games. It has a colorway pattern featuring blue, red, green, yellow, and black, which are of course the colors of the five Olympic Rings. The blue theme is found in the rear camera, sensors, and flash. The power button is red and the volume button is green. The receiver and the home key are yellow. And of course, the whole device is black.

You will also be able to see the color schemes in the user interface, both for the home screen and the lock screen, and even in the message, dial, and contact screens, plus the notification bar. There are pre-loaded Rio-themed wallpapers that you can choose from and if you’re feeling very nationalistic, the device has a 3D Flag app so you can display your country’s flag on the radiant screen. The package also comes with an eco-friendly re-usable pouch package.

There will only be 2,016 devices in each of the countries where the phone will be released, namely Brazil, China, Germany, South Korea, and the US. It will cost $849, which is a bit more expensive than the $769 regular unlocked version. Samsung will also be giving out 12,500 Galaxy S7 edge Olympic Games Limited Edition and Gear IconX devices to athletes that will compete in the Olympics in August.