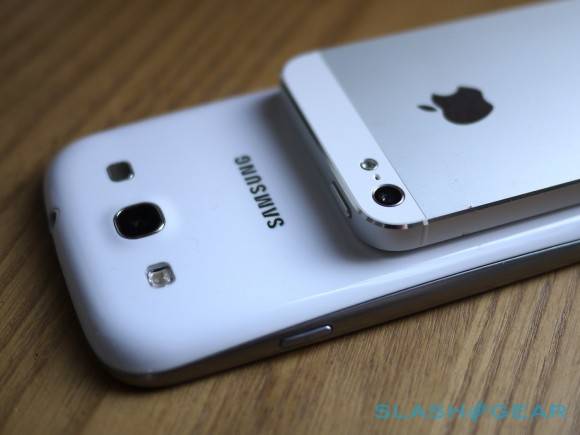 Given the steep cost of a new smartphone, picking one that’s perfect for you can be a pretty daunting task. We often turn to retailer employees when it comes time to pick a new handset, asking them for suggestions about which phone would be ideal for our lives. As it turns out, employees at some of the biggest phone retailers in the UK seem to suggest Samsung handsets over Apple‘s iPhone line more often.

That’s what the results of one mystery shopper survey claims, at any rate. The survey was carried out by Informa Telecoms and Media and had mystery shoppers visiting retailers like John Lewis, O2, Carphone Warehouse, Everything Everywhere, 3 Maplins, PC World, and Phones 4U. Shoppers would ask employees to recommend three tablets or smartphones, with Samsung being recommended the most.

In fact, six of the stores surveyed recommended Samsung handsets over the iPhone 5, most frequently suggesting the Galaxy S III or the Galaxy Note II. Advertising in the stores seemed to be even between Samsung’s flagships and the iPhone, but only two stores recommended the iPhone 5 over the competition. That may sound pretty bad, but it’s certainly better than the fate of companies like LG, RIM, or Motorola, which were nowhere to be found among retailer recommendations.

Informa suggests that Samsung netted more recommendations because it would be easier for employees to sell the company’s phones, thus making it easier to earn a commission. Perhaps instead these employees simply prefer Samsung’s handsets over Apple’s? There’s a reason the Galaxy S III and Galaxy Note II have each sold millions upon millions of units, after all.