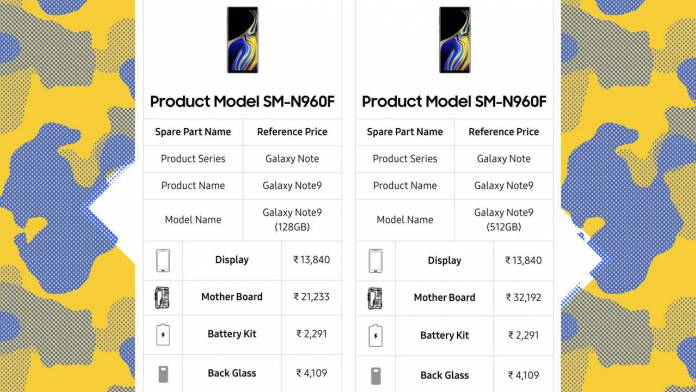 If your phone doesn’t cost that much and a part or several parts break down, you probably just think about replacing it with another not so expensive device or maybe even level up to a more premium one. But if your device costs more than a thousand bucks, as some flagship ones now are, then you’ll find a way to get the part that broke down repaired. For the first time now, Samsung has published how much those specific phone parts cost, but apparently it’s still only for reference.

Samsung published on their website in India a list of some parts of phones like the Galaxy Note 9 and their corresponding prices. Parts displayed include display, motherboard, battery kit, and back glass. And while you do have a mobile phone parts sales office in India with an online storefront, these published prices aren’t necessarily meant for consumers to start buying parts on the fly and maybe even sell them elsewhere.

The prices are actually meant for consumers who will go to local Indian repair shops and Service Centers so they have a reference on what to expect to pay. There is a note on the site that says “actual price for specific model will be confirmed by Service Center at the time of repair.” Hopefully, people read the fine print and not demand the exact price posted or else there will be a lot of confusion.

The service centers actually operate not just for India but also Bangladesh, Sri Lanka, and Nepal and they can “help you with anything” when it comes to repairs to your smartphone. In other countries like in the US, these services are done through mobile data carriers so we don’t know if Samsung will be doing this publishing of part prices in other places as well.

Now as to whether Samsung will eventually sell parts by piece, that is still anyone’s guess. Motorola has actually been doing this since October 2018 but we have no data to say if that has been a good thing for them, although it’s probably a great thing for consumers of course.