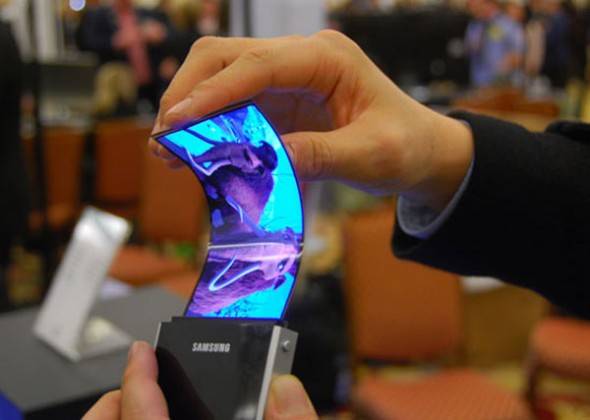 All those interesting flexible displays we see now and again at trade shows have one thing in common: they’re not available for purchase. Companies showing the bendable, flexible displays commit to bringing them to retail, but offer no timeline for when that will be. Samsung may have just had the first break, though, and mass production could come sooner rather than later.

The Samsung Advanced Institute of Technology has had a “breakthrough sythesis method” in the development of the material used for the screens, called Graphene. The flexible material has other benefits as well, and can be used for other purposes. When compared to silicon, a material used in most hardware components, Samsung says Graphene has “one hundred times greater electron mobility than silicon”, and is more durable than steel. It’s flexible, and also has a high heat conductibility. Samsung notes it’s perfect for “flexible displays, wearables and other next generation electronic devices.”

Samsung accomplished this breakthrough with the help of Sungkyungkwan University. In a blog post, Samsung announced the breakthrough, and gave a glimpse into how it was accomplished:

Through its partnership with Sungkyungkwan University’s School of Advanced Materials Science and Engineering, SAIT uncovered a new method of growing large area, single crystal wafer scale graphene. Engineers around the world have invested heavily in research for the commercialization of graphene, but have faced many obstacles due to the challenges associated with it. In the past, researchers have found that multi-crystal synthesis – the process of synthesizing small graphene particles to produce large-area graphene – deteriorated the electric and mechanical properties of the material, limiting its application range and making it difficult to commercialize.
The new method developed by SAIT and Sungkyunkwan University synthesizes large-area graphene into a single crystal on a semiconductor, maintaining its electric and mechanical properties. The new method repeatedly synthesizes single crystal graphene on the current semiconductor wafer scale.

Samsung is ready to point out this is great for wearables and flexible displays, but what they’re not telling us is that Graphene is a major component for future battery technology. Time and again, news pops up of a smartphone battery that can charge in 15 minutes and stays live for a week. A big part of that is Graphene, which allows for the exchange on electrons faster than a normal battery, charging it quickly. There is still no timeframe for when this could hit devices, much less retail, but it’s a major breakthrough for mass production. If you want more details on the process, Samsung notes their research will be published in today’s issue of Science Magazine and Science Express, which is downloadable.