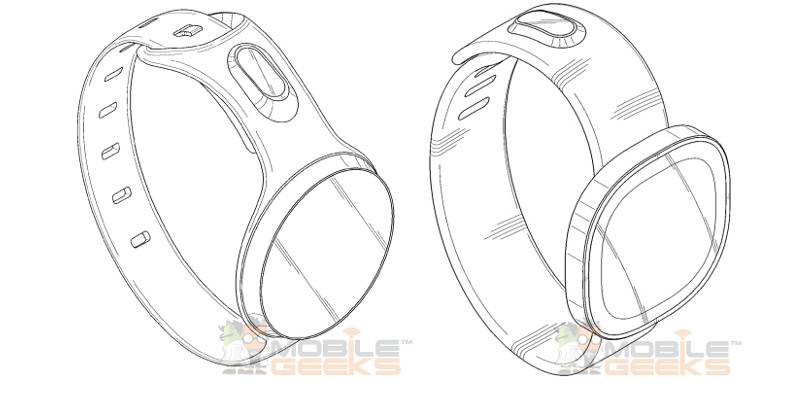 Clearly Samsung isn’t done yet with smartwatches, though now it’s more a question of whether it will go with more Android Wear or stick to Tizen. Whichever OS it chooses, it might already have a design in mind, as seen in new patents filed last March, showing smartwatches with less angular faces and a charging connector built into the wrist strap.

Look to our smartwatch and Android Wear tag portals for more wearable bits and bites!

Except for the watch face, the overall design of these smartwatches seem to make a return to the Galaxy Gear aesthetic, particularly the strap. This is even more apparent with the presence of a camera on the strap, something that Samsung “fixed” in the Gear 2, where the camera was relocated to the frame of the watch itself, leaving the strap free to be swapped with other colors and styles. That said, the presence of a camera clues us in that this might actually not be intended for Android Wear, as Google’s wearable platform currently doesn’t make provisions for cameras. If so, then Samsung might be going with Tizen again on this one, which will surely sour relationships between the two companies even more.

The rounder faces of these smartwatches are notable in themselves. At the moment, only the Moto 360 has, or will have, that kind of display and its usability has yet to be tested in the real world. It seems, however, that Samsung is also a believer in this circular form. That said, it seems to also have a fallback, a watch face variant that is more quadrilateral but still sports rounded corners and curved edges. How the smartwatch will charge is also an interesting point, which again could hint that this is a Tizen design. Current Android Wear devices have the charging pins located at the back. Though Samsung’s Gear 2 family follows the same convention, it is more free to change things on its own when it comes to Tizen. In this case, the pins are located on one end of the strap, which makes one wonder about the form of the actual charger itself. Hopefully it means more cumbersome cradles.

Of course, these are merely patents, which is no guarantee of an actual device, interesting as they are. Samsung is practically just calling dibs on these designs. Given its push for wearable technologies, however, it could very well make it into an actual product line. The company has also recently trademarked the name “Gear S” in the US, which could be what the rumored SIM-toting Gear Solo would be called. At the moment, there is no rumor yet if Samsung has any upcoming smartwatch in the works, but we could likely hear whispers about it this coming IFA Congress in September.