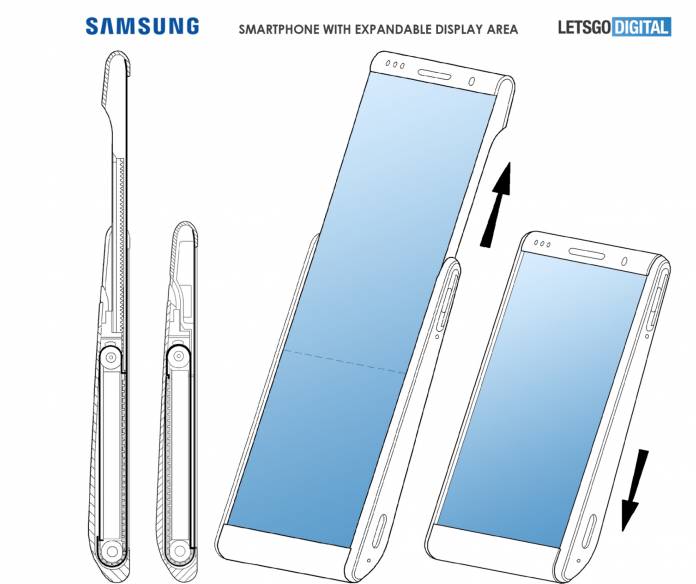 We still don’t know yet if smartphones with folding displays is just a fad or the next big thing in the industry. The Samsung Galaxy Fold is still not out of the door yet and has been having some issues with the hinged form factor. But the Korean OEM isn’t giving up just yet and may be exploring some other alternative extended displays as evidenced by one of their patent filings that has now been made public but was filed before all these Galaxy Fold problems came out.

According to Dutch website Let’s Go Digital, Samsung filed a patent last November 28, 2018 with the World Intellectual Property Office (WIPO) for a device that includes a “flexible display with expandable display area”. Now the patent has been made public and we’re seeing a device that has a kind of vertically scrolling display that can give you an extra large screen surface if needed.

Based on the patent’s drawings, we see a vertically extended handset and has a flexible display on rollers. You can increase the size of the screen but not in a tablet-style display. The aspect ratio is more similar to the 21:9 of the Sony Xperia 1 although the shape may be weirder in order to house the mechanism that it needs.

As always, patent filings don’t always get produced and mass-distributed so we’re not sure if this is something Samsung is serious about. It’s an indication though of what other devices they’re considering exploring and what direction they may eventually go.

As for when the Galaxy Fold will eventually hit the market, that is still up in the air currently. Samsung is trying to make sure that they’ve fixed the problems and that they have their bases covered to avoid another fiasco.