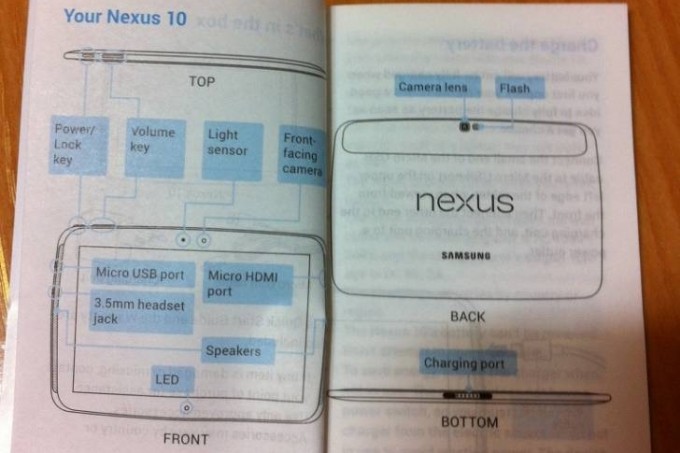 We are only days away from Google’s big media event on Monday, and rumors are circling around exactly what Google is going to announce. Well, Korean site Seeko has acquired a Samsung Nexus 10 manual, which seems to confirm the larger version of the Nexus tablet’s existence. Sadly, the page posted from the manual does not tell us much else about the new tablet, other than the mere fact that it probably exists.

One thing the page from manual tells us is that the device does not look very much like the Nexus 7. The sketch of the tablet in manual features bulging sides and a strip of plastic or metal at the top. The volume switch and charger port appear to be the same as on the Samsung Galaxy 10.1.

Everything else about the sketch on the photographed page of the manual look pretty standard for a 10-inch tablet. It has a rear facing camera with a flash. It also features a front-facing camera and a light sensing port. A Micro-USB and Micro-HDMI port are also present. Heck, it even has speakers. As I said previously, pretty standard stuff as far as tablets go.

Of course, because the manual tells us so little, it’s impossible to prove the validity of it. Thankfully, Google’s big event is right around the corner, so we do not have long to wait to find out just how true this report actually is. One thing we certainly hope is true is the reported 2560 x 1600 resolution for the device. That would certainly rival the iPad in terms of pixel density. We will keep you posted with all things Nexus 10 as it happens. 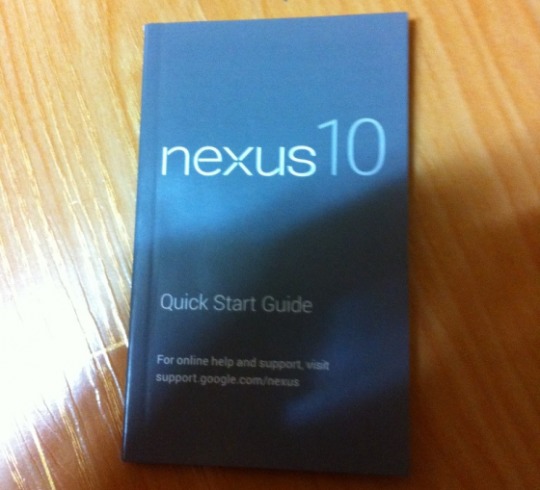