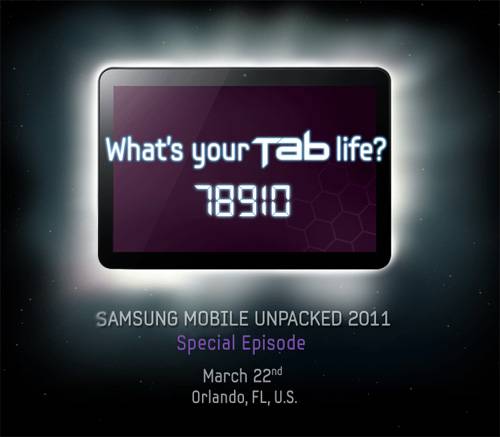 Samsung may be unveiling their new 8.9″ Galaxy Tab at a press event on March 22, in Orlando, Florida. The news comes from an image on Samsung’s facebook page with a cryptic reference to the numbers “78910”, which many believe points to an 8.9″ tablet since the original Galaxy Tab is 7″ and Samsung unveiled a 10.1″ tablet at CES. So an 8.9 inch tablet would fit right in the middle and make for a good mid-range size. But is there really a need for something in between the two existing sizes?

The tablet shown has a honeycomb design signaling it’ll likely take advantage of Google’s new from the ground up Honeycomb tablet OS. And although it’s hard to see in the image, it also sports a front facing camera (here’s hoping it’s better in quality than the original). Other than that, there’s no real detail on specs until the mid size tablet is unveiled at CTIA Wireless on March 22. Stay tuned.