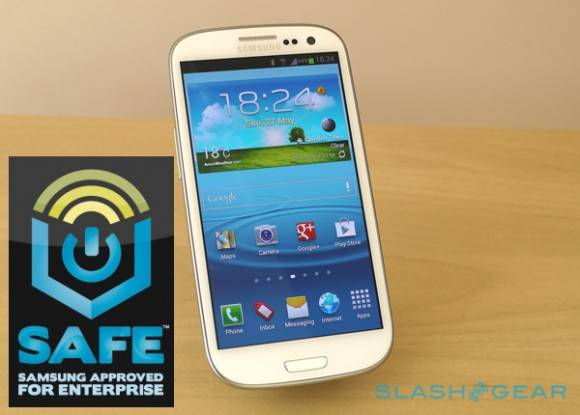 Samsung today has unveiled a new smartphone as well as a rating for their devices being called SAFE, which stands for “Samsung approved for enterprise.” This new SAFE rating has immediately been attached to their brand new Galaxy S III, reassuring users that Samsung is the best route — especially for enterprise users.

Data will no longer be a security issue for those using SAFE, which Samsung details as a system that will “defragment the Android OS across multiple versions from Gingerbread to Ice Cream Sandwich at US carriers” according to the Korean company. With support for AES-256 bit encryption, VPN and Mobile Device Management functionality, and many more things coming soon. SAFE devices will have enhanced support for Microsoft Exchange ActiveSync, and mobile virtualization tech that should make users rest easy.

The increasingly popular “BYOD” (not beer, but bring your own device) model that is becoming the standard in the work environment these days can rely on Samsung and their new SAFE devices. Samsung describes SAFE as a “quality assurance program” developed alongside multiple enterprise software and services providers. They’ve also outlined a new SAFE2SWITCH program where you can trade in a rival or older device for a new SAFE certified Galaxy S III. This is good news for the corporate world. Well done Samsung!