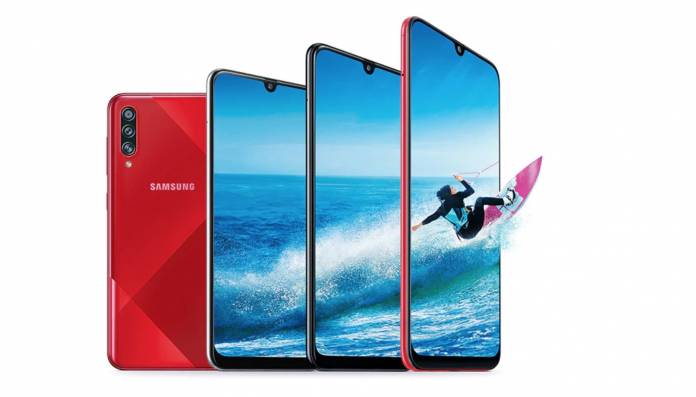 One of the recent worst kept secrets in the mobile market is that Samsung will be launching a new smartphone called the Galaxy A70s. There have been several leaks and rumors about the device but now we have the official word. The Samsung Galaxy A70s has officially launched in India as the newest device from the Galaxy A range. It comes with the amazing-sounding 64MP Bright GW1 sensor which is actually the main shooter in a triple camera setup.

The Galaxy A70s has a 6.7” FHD+ Infinity U Display with the Super AMOLED technology. It is powered by an Octa-core Qualcomm Snapdragon 675 processor and has 6GB/128GB and 8GB /128GB variants. It has a 4,500 mAh battery with 25W superfast charging. It is also equipped with Dolby Atmos so you can have a 360 degree surround sound experience. It has an on-screen fingerprint scanner, defense-grade Knox Security, and will run on Samsung One UI.

But of course, the major selling point of the Galaxy A70s is its 64mp triple camera and the other tools that come with it. You have the Night Mode which lets you take pictures even in extreme low light conditions and the Super Steady feature so you can take smooth videos. You also have the 8MP Ultra-wide camera and the 5MP Live Focus lens for those favorite Bokeh effect shots. You will also be able to shoot videos with 4K ultra HD capability.

You also have the Alive Camera features like the Best Shot Suggestion and the intelligent Scene Optimizer which will help you instantly optimize the image quality in terms of color, contrast, and brightness. The camera can also recognize an image as text and scan it as a document. Even with just the 64MP triple camera anyway, it seems like a solid buy anyway. It will be available in three colors – Prism Crush Red, Prims Crush White, and Prims Crush Black.

The Galaxy A70s is now available in India through Samsung Opera House, e-shop, and other online and offline stores. The 6GB/128GB variant is priced at INR 28,999 and the 8GB /128GB is at INR 30,999. No news yet if it will be available outside of India.