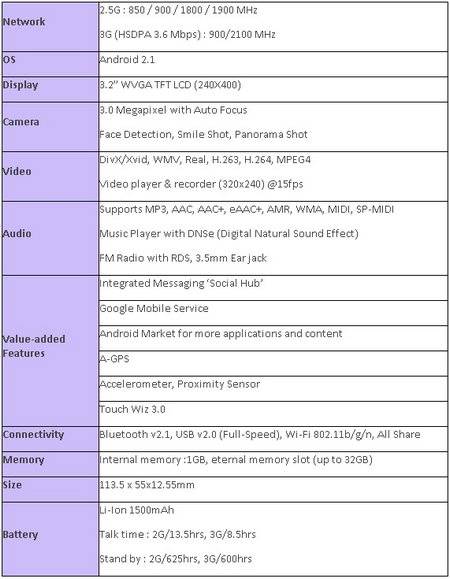 According to a press release by Orange UK, the Galaxy Apollo will launch soon and will be exclusive to their network.  If you were hoping to get your hands on it and you’re not in an area that is supported by Orange UK, you may be out of luck for awhile. There is currently no unlocked version that I could find. This device is a mid-range Android handset and it can be you’re either on a Pay as You Go Plan or on contract.

Some of the best features are the 3.5mm jack, FM Radio, DiVx and Xvid support. It only has a 3.2 inch screen and runs Android 2.1. This is a step down from the Galaxy s but it’s still a great offering from Samsung. If you’re in the market for a budget Android device, this will fit bill. There’s currently no price or release date set.

LONDON, UK – 15th June 2010 – Samsung Electronics Co. Ltd., a leading mobile phone provider today announced the launch of the Galaxy Apollo (model: i5801) exclusively with Orange. Orange customers will get to choose three exclusive coloured cases from a range of eight which are redeemable after purchase. Available on both Pay as You Go and Pay Monthly contracts, an Orange Wednesdays app will be pre-installed on the device.

The Galaxy Apollo supports the highly connected lifestyles of today’s younger mobile users who value a full range of social networking capabilities at their fingertips. The Galaxy Apollo features Samsung’s Social Hub, an integrated phonebook that links contacts from across social networks, allowing users to connect with friends across platforms and communicate seamlessly across networks. Users’ contact lists from sites including Facebook*, MySpace* and Twitter* are accessible on one platform; ensuring that users can remain fully connected at all times. Social Hub also allows fans of social networking to view photos on their mobiles and seamlessly upload, manage and share photos from Twitter*, Facebook*, YouTube and Picasa* or create a digital photo album while on the go.

The latest in Samsung’s portfolio of Android-powered devices, the Galaxy Apollo i5801 delivers rich media experiences that will impress even the most avid mobile users. Featuring a unique, sleek design exclusive to Orange for three months, the Galaxy Apollo i5801 is an affordable yet powerful social media device, providing an integrated mobile experience. DivX support transforms the device into a personal entertainment system for video, while support for multiple audio formats will delight music lovers. The long-lasting Li-Ion 1500mAh battery means that the viewing experience is maximised. The Samsung Galaxy Apollo comes equipped with the TouchWiz 3.0 and user interface, which makes searching and browsing easy and intuitive.

Simon Stanford, Head of Mobile at Samsung Electronics UK & Ireland said; “The Samsung Galaxy Apollo extends our portfolio of Android-powered devices and underlines Samsung’s commitment to offering a Smartphone for every lifestyle. Consumers are really responding to the Android platform which offers an extensive range of innovative apps to download, as well as the ability to multi-task with apps running in parallel. The Samsung Galaxy Apollo offers a compelling mix of social networking and rich media experiences which will appeal to consumers who want a Smartphone device at an affordable price. We are sure that Orange customers will enjoy being the first to own and experience the Galaxy Apollo”.

More information about Samsung can be found at www.samsung.com/uk