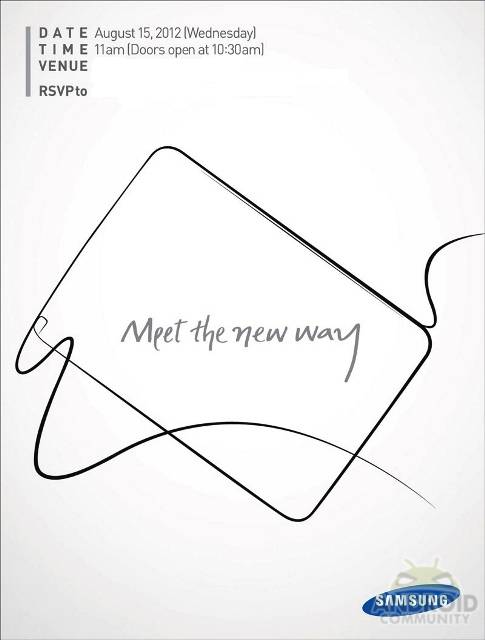 Samsung has been busy this week preparing for their next set of announcements. We know they have both the Galaxy Note 10.1, as well as the Galaxy Note 2 coming up. After sending out invites for their Samsung Unpacked mobile event in Germany at the end of the month, today they’ve done the same for that “major announcement” set for August 15th.

Earlier reports confirms the Galaxy Note 2 will be announced on August 29th at IFA in Berlin, Germany, but now the invitations being sent out hint calmly but firmly at the Galaxy Note 10.1 tablet. The subtle hints of “meet the new way” goes right in line with their “time to tab” comments and the lines across the invite leads us to believe it’s the Galaxy Note 10.1 with the S-Pen stylus.

A few weeks ago when Samsung sent out the “save the date” email they called this a “major announcement” but the Galaxy Note 10.1 isn’t anything new at this point. We’ve received hands-on with it a few times, but it has since seen a slight design change and the inclusion of a quad-core processor.

Either way the Galaxy Note 10.1 will be Samsung’s new flagship top end tablet. Coming with a stylus, Wacom digitizer, a quad-core Exynos 4 Quad processor, 2GB of RAM, and hopefully some impressive storage options. We know they’ll have a 3G/4G and WiFi model but until they unveil it all on the 15th we’ll just have to wait and see. Stay tuned for full details.