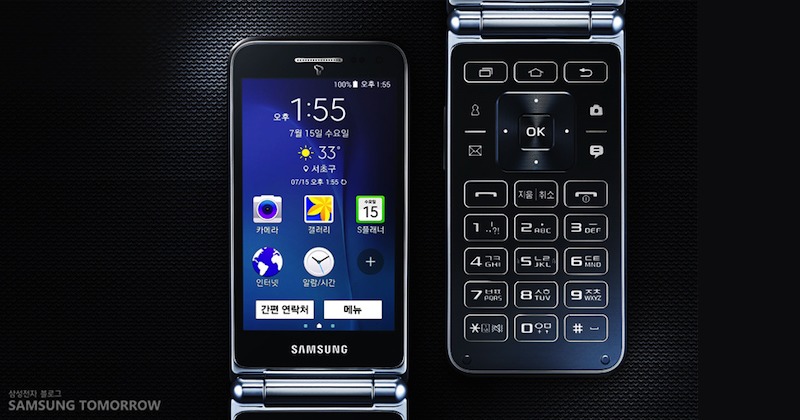 Perhaps as response to LG‘s announcement of the Gentle flip Android phone, here’s Samsung with the latest Galaxy Folder clamshell phone. This is one practical smartphone because of the compact size and the cool features you usually find in a Samsung mobile device. It’s not a premium model but the clamshell design makes it a trendy gadget we’re all familiar with in the past.

You see, more companies are now releasing their own flip smartphones. The form and style are rather old but the phones now have more functions compared to decades ago. This Samsung Galaxy Folder is one affordable phone that can be quick and easy to use. Features include a large keypad and a 3.8-inch WVGA TFT touchscreen display, WiFi, GPS, LTE connectivity, 8GB built-in storage, and a 1800mAh battery among others.

We’re not sure what version of mobile OS is on the clamshell phone but it seems to be Android 5.0 Lollipop. Flip phone will available in either dark blue or white for about $250 in South Korea starting next month.

The last Samsung Galaxy Phone model was launched a couple of years ago. The form and design may be similar to this year’s model but specs are definitely better. As with any smartphone today, you are free to access the Internet, do instant messaging, send SMS, and enjoy several apps.