If you’re one of the testers of the beta version of the Samsung Internet mobile browser, you might want to upgrade to the latest version (as you always should). They refer to it as a “feature packed update” and based on what they talk about in the blog post, it really is, with an engine upgrade, protected browsing, improvements to its content blockers, and on the cosmetic side, some interface improvements as well. It also spells good news for those whose devices have low memory as some of the improvements are meant for you.

First of all, websites should be faster and online graphics for your gaming should be better as the engine has been upgraded to Chromium 59. You will also now get a warning if the website you’re going to is listed in their database of known dangerous sites. You can still choose to proceed if you think there’s been a mistake but don’t say you were not warned. There are also now improvements in its content blockers as you can install it directly within the browser. But the quick install feature is only available for Samsung phones and tablets. 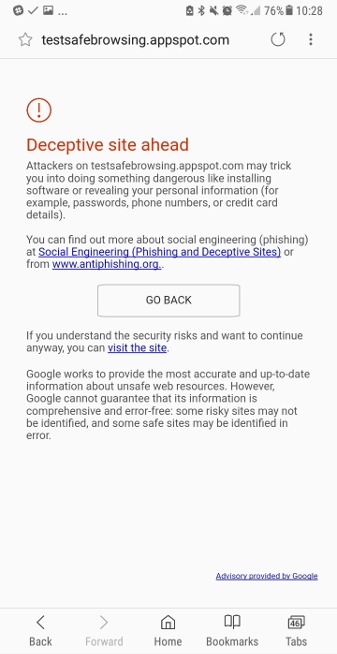 The interface or UI has also been improved, including a revamp of the URL bar so that there is more space for ambient badges specific to some websites. When the browser detects a Web App version, you will get an “Add to homescreen” button so you can install it with a single tap. You’ll also see a Reader mode badge if you want to have a distraction-free reading experience.

For those who use devices that are kind of low in memory, Samsung Internet has been able to make it more memory efficient, even as you switch tabs and maybe even multi-task. The beta version 7.2 is now available for those in the beta program and hopefully in a few weeks or months, we get the stable version.