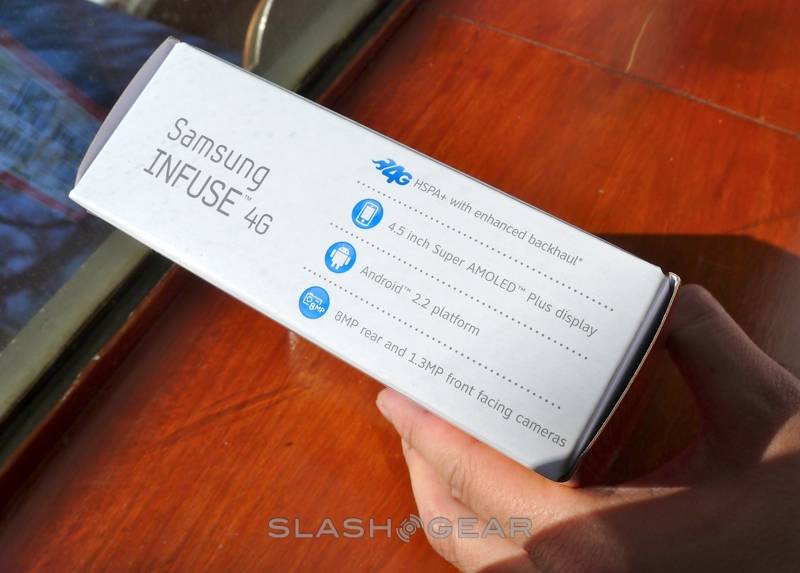 Today at its New York City reveal we got the chance to take a peek at the brand new Samsung Infuse 4G. This is a phone with the biggest Super AMOLED plus screen ever seen on a handset, the thinnest phone thus far in the official Samsung USA released ranks (the absolute thinnest I think you already also know the name of) and it’s rolling out on AT&T’s 4G network. Would you like to know more? Have a peek at this monster and get your pants in a bundle!

The display and the extremely thin profile are obviously two of the strongest design choices here, with the 8 megapixel camera on the back and the 1.3 megapixel camera on the front almost seeming like par for the course (especially in these days of such levels of camera rating being everywhere.) WIth the DROID (Samsung) Charge having just been passed out to reviewers and the Samsung Galaxy S II out already in the UK, the Infuse 4G seems to be just that – a fusion of the two. Will it hold true as we pass it through the big review? 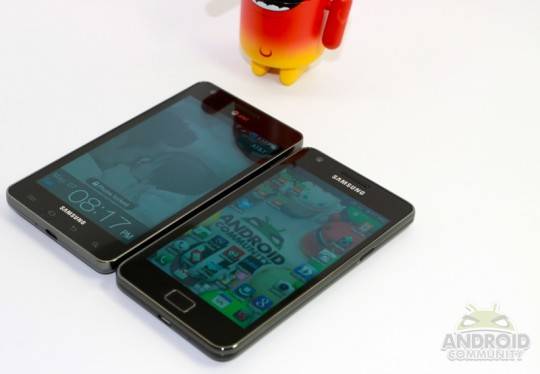 The display isn’t quite qHD, but the WVGA is certainly fine and dandy, and Super AMOLED Plus could make any display resolution flip out. This device starts out with Android 2.2 Froyo with TouchWiz 3.0, not quite the 4.0 we saw at CTIA 2011. Hopefully both a 2.3 Gingerbread and TouchWiz 4.0 in the near future. We’ve heard it both ways so far from people at the event – some say it’s too wide and tall, some, like our good pal Philip Berne (not at the event) say it’s large, but doesn’t feel like it when you use it.

Have a look at our quick unboxing and hands-on courtesy of Vince from our sister-site SlashGear:

And have a look at some lovely photos in the gallery below. Also note that yours truly will be getting this device in the mail tomorrow, so expect a swift review before the end of the weekend!

DALLAS, May 5, 2011 — AT&T* and Samsung Telecommunications America (Samsung Mobile), the No. 1 mobile phone provider in the U.S., today announced the upcoming availability of the Samsung Infuse™ 4G.

Key Facts
• Exclusive to AT&T customers, the Samsung Infuse 4G will be the nation’s thinnest 4G smartphone at 8.99mm at its thinnest.
• Delivers the largest display in AT&T’s smartphone portfolio with a brilliant 4.5-inch screen featuring next-generation Super AMOLED™ Plus technology.
• Powered by a 1.2 GHz processor and the Android™ 2.2 platform, the Samsung Infuse 4G also boasts an 8-megapixel camera, and a $25 credit to download movie content from Samsung Media Hub.
• Pre-loaded version of Angry Birds features an exclusive hidden level for Infuse 4G customers.
• Samsung Infuse 4G will be available in AT&T company-owned stores and online at www.wireless.att.com on May 15 and will cost $199.99 with a two-year contract and no mail-in rebate. (Minimum $15 data plan required)
Customer Benefits

The Samsung Infuse 4G will be the thinnest 4G smartphone available in the U.S. and will feature the largest screen — at 4.5 inches — in AT&T’s smartphone lineup, and the largest touch screen on any Samsung phone. Powered by a 1.2 GHz application processor and running the Android 2.2 platform, the device delivers a brilliant display using Samsung’s next-generation Super AMOLED™ Plus technology which features 50 percent more sub-pixels for better contrast. The display also offers unmatched outdoor viewing quality, even in the brightest sunlight.

With the Infuse 4G, Samsung and AT&T are raising the stakes on pre-loaded content that is not available on any other device. In collaboration with Rovio, the Infuse 4G will feature a special edition of Angry Birds pre-loaded on the smartphone. Players can unlock a special “Golden Egg” level of the game, and once the special level is completed, users can register to win Samsung prizes exclusive to Infuse 4G users.**

The smartphone also includes an 8-megapixel camera/camcorder with auto-focus and flash that shoots HD video with incredible detail. A front facing camera is perfect for self portraits or video chat. Customers can also watch hit movies and TV shows from preloaded apps like Samsung Media Hub, U-verse Mobile and U-verse Live TV.

The first 500,000 Infuse 4G units sold will include a $25 voucher for consumers to get started on downloading content from Media Hub. With Media Hub’s progressive downloading feature, users can start watching their content almost immediately as the rest of the file downloads to the Infuse 4G. Plus, all Media Hub content can be shared among five Media Hub-enabled devices on the same account. The Infuse 4G also comes with a 2GB microSD card with preloaded trailers for upcoming summer movies.

Compatible with the Infuse 4G and other devices on the Android 2.2 platform or better, AT&T has also launched a new, fun app called JustUs. The app combines both social media and text activity from five favorite contacts into an animated wallpaper, keeping users better connected with those that matter most. Customers can download the app for free in Android Market today.

Quotes
“The 4.5-inch screen on Infuse 4G is enhanced further with Samsung’s Super AMOLED Plus technology. Colors are rich and bright, even while outdoors in sunlight,” said Jeff Bradley, senior vice president, Devices, AT&T Mobility and Consumer Markets. “When you juxtapose that with the fact that it’s the thinnest 4G smartphone out there today, it’s an incredibly compelling choice for our customers.”

“When you combine the powerful 1.2 GHz application processor with AT&T’s advanced 4G network, this device will truly be the fastest smartphone Samsung has ever created with AT&T,” said Omar Khan, chief technology officer & chief product officer for Samsung Mobile. “The Infuse 4G is our latest example of Samsung’s global leadership in Android platform smartphones. With every Android smartphone that we launch, we’re bringing something new and exciting to the market.”

Smartphone Portfolio
AT&T is a pioneer in smartphones and devices and expects to widen its portfolio in 2011. In January, AT&T committed to introducing 20 4G devices and 12 additional Android devices by the end of the year. Samsung Infuse 4G will be one of several new 4G devices that have been offered to AT&T customers in the first half of 2011.