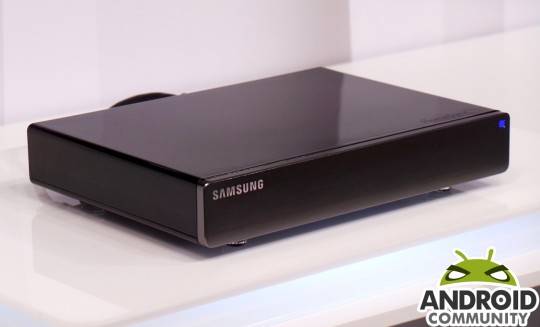 Samsung was showing the HomeSync media center back in February and as of today there is a bit of good news for those in the US market. The HomeSync will be available for purchase beginning on October 6th. Samsung touts the HomeSync as being a “household Android media center for storing, synchronizing and streaming content across multiple devices.” To that point, the HomeSync means those with a Galaxy device will be able to stream content on a television.

Of course, there is a bit more to the HomeSync. Other features here include the internal storage, the ability to share, the ability to access the stored content from anywhere and more. Beginning first with the storage, those picking up a HomeSync can expect 1TB of storage that can be divided as shared and/or private storage.

The sharing functionality means users will have the ability to create up to eight separate accounts. Each of those accounts can be setup to sync and share content. And furthermore, you are able to register up to six devices per account. Simply put, you have quite a bit of resources available to share the HomeSync between devices and family members. The anywhere access is just as the name would imply — users will be able to view their stored content regardless of their current location.

That all being said, we spent a bit of time with the HomeSync when it was announced back in February. A video can be seen above and the full post can be found in the Timeline below. Finally, Samsung has the HomeSync priced at $299 and is offering a $50 Media Hub credit as part of the Galaxy Perks program.